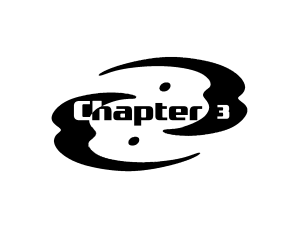 “This sturdy clingtwiner will do, I expect,” the bright green figure murmured to himself, stretching to grab a thick vine that was hanging down in front of him. He glanced into the canyon below, then shook his head and grinned. “No secondthink, just go…!”

With that, he leaped off the tree branch overhanging the canyon. He swung himself halfway across, then let go. Momentum carried him in a graceful arc over and past the gorge.

He laughed with delight as he landed cleanly on a nearby tree.

“Now that was fun,” he exclaimed.

He hadn’t been sure that he could make such a leap. But now he knew at least one thing: The air was his friend!

He didn’t know much else. He knew his name was Lewa. At least he thought so. He liked the name – it sounded strong and mysterious.

Lewa, mysteryking of know-nothingness, he thought with a smile. That’s me!

He glanced down at himself, at his strong limbs the color of the jungle leaves. In one hand he carried an axlike blade, perfect for slicing through thick underbrush or twining foliage. Though he couldn’t see it, he knew that his bright green mask swept back in a streamlined shape perfect for cutting through the air.

His smile faded as his mind flashed back to the dreams. Was that all they were? Dreams? He hoped so – for they had been dark and chaotic, and filled him with fear.

Lewa had immediately found himself drawn to the lush, dripping jungle. Now that he was here, he felt at home.

As he reached the edge of a large stand of Volo trees, Lewa jumped onto a slender branch. The motion flung something out of a nest of feathers and twigs farther along the branch.

He cried out in dismay, realizing that he had just ejected a baby Taku out of its nest. Without thought, he flung one arm upward through the air in the direction of the falling chick.

For a moment he thought that the baby bird was flying away. Then he realized the truth.

No, not flying – the wind had caught it and carried it aloft.

Leaping across to a closer branch, Lewa reached up and caught the chick gently in one hand. He placed it carefully back in its nest.

Struck with a sudden impulse, he flung up his arm. Once again, a quick gust swooped up from below with a swirl of leaves.

“It was me!” Lewa breathed in amazement. “I did it. The wind answers to me!”