“Looks like Cahdok and Gahdok had one more surprise for us!” Onua shouted as he tried to stay upright.

Lewa shook his head. “This is not their doing,” he called back, the knowledge strong in his mind. “This comes from the heart of Mata Nui.”

Before anyone could respond, the ground fell away beneath them. Tahu found himself sliding down a long, narrow tube. Its walls were clear, allowing him to see the other Toa trapped within similar tubes.

What now? the Fire Toa thought rather desperately. Just when we think we’ve finally won –

Just then the tube ended abruptly. Tahu found himself flying through the air for a split second, and then –

He was enveloped in a gel-like substance halfway between liquid and solid. The gel cushioned him, seeping into every joint, making him feel warm and cold by turns.

Protodermis, Tahu thought fuzzily. The substance seemed to be seeping into his mind as well as his body, making it difficult to think or move. We’re swimming in protodermis.

The mysterious substance had been mined on Mata Nui for years, used as a source of power. What effect would it have on the Toa?

The Toa of Fire closed his eyes, feeling the protodermis surround him. He wanted to struggle, to fight his way to the surface. But he couldn’t move.

An immense heat swept through his body, his blood boiling and white-hot flames flickering behind his eyelids. As soon as the heat had come it disappeared, replaced by an icy cold so deep that Tahu couldn’t even shiver. Within a fraction of a second, he felt himself sinking into warm, welcoming water, deep and pure. Then the water evaporated away into a howling wind that swept him around around – until he landed on the hard earth and felt himself sinking down, down, down into the stifling depths. Finally he hit the hard surface of a stone cliff and behind his still-closed eyes it was as if he could see right through it until it held no mysteries.

Then the stone, too, fell away. For a long moment there was nothingness.

With a gasp, Tahu broke through the surface of the protodermis. Coughing and choking for breath, he looked around and saw the other Toa surfacing nearby.

They levitated up in a group, landing on a rocky ledge above the bubbling pit of protodermis. The cavern was empty. Cahdok and Gahdok had disappeared. But the Toa were even more shocked by the changes they saw in one another.

Each of them was still recognizable – but they had all changed. Instead of his golden Kanohi mask, Tahu’s face was now covered in a larger mask of gleaming red, while his body shimmered in metallic tones of silver and bronze. The others had undergone similar transformations.

“What has happened?” Gali voiced the question at last. “What have we become?”

“More than we were,” Kopaka answered, his cool voice tinged with the warmth of amazement. “More than anyone has ever been.”

Sure enough, Tahu could feel power surging through him. But he glanced upward with concern. “Let us worry about why it happened later,” he said. “There are more important questions to answer now.” 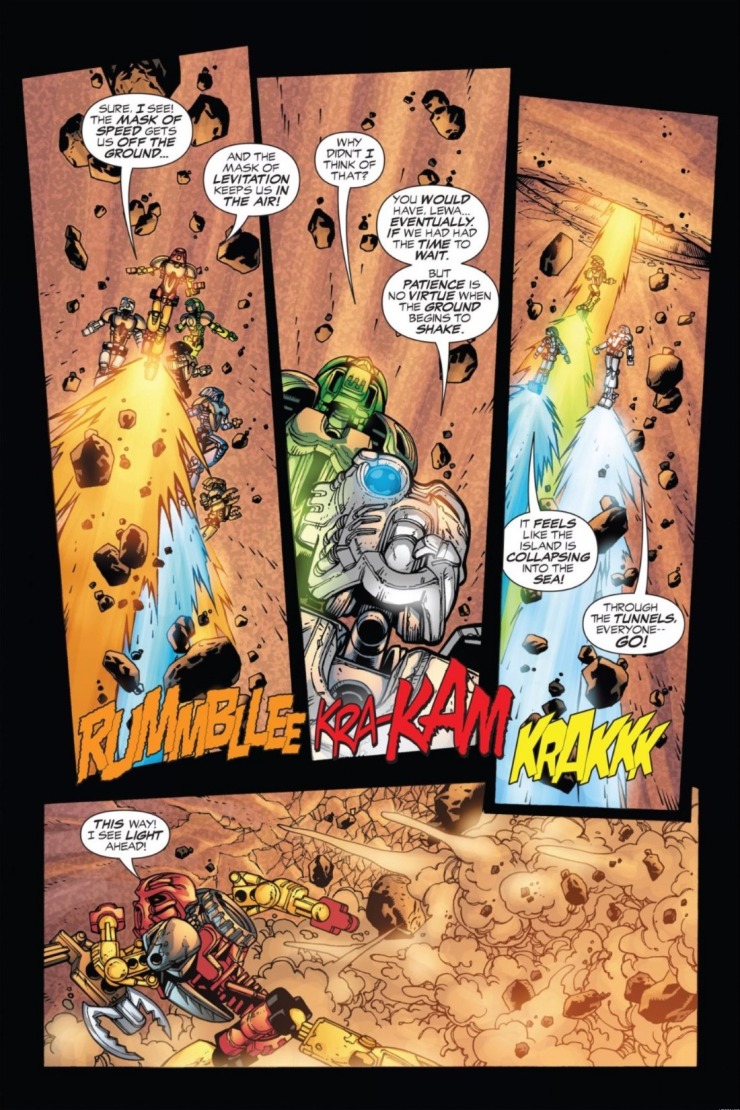 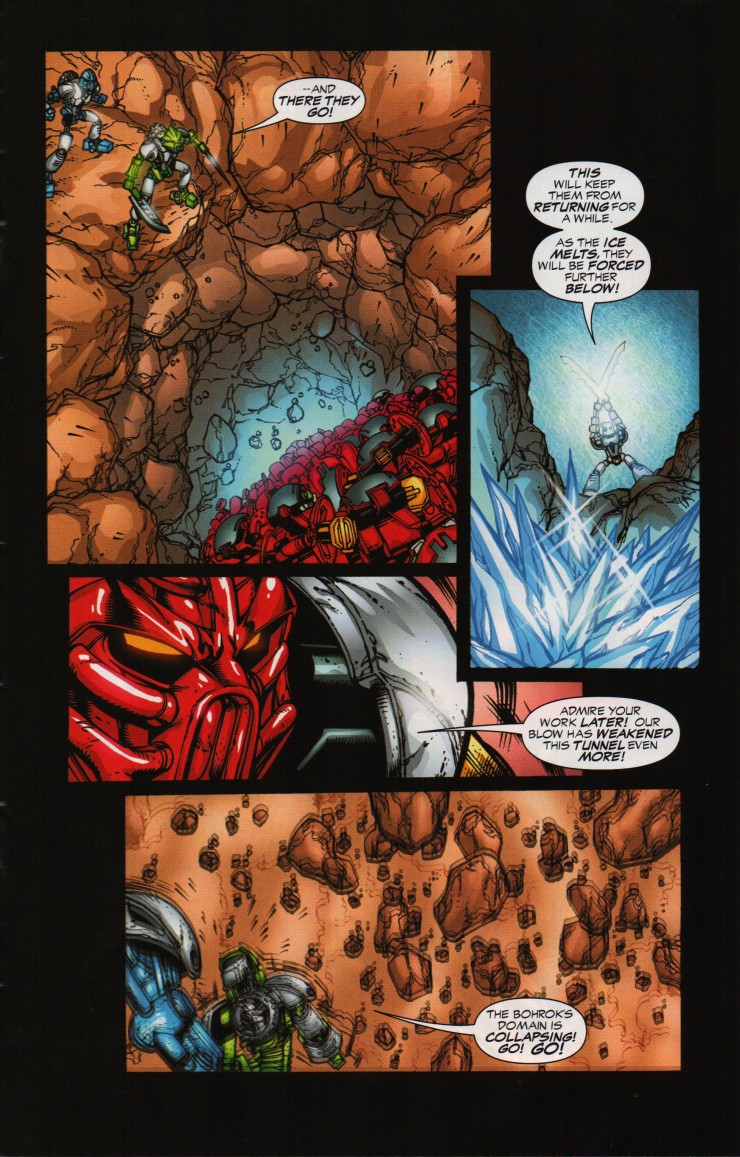 Soon they were bursting out of the darkness of the tunnels onto the surface. They flew high up into the air until they could see the island from end to end. While there were enormous areas of bare earth, charred rock, and other damage, the Bohrok swarms were nowhere to be seen.

“We did it!” Gali cried as the Toa settled back toward the ground. “The threat of the swarms is ended! But at what price?”

Tahu couldn’t help wondering the same thing as he glanced at Lewa. But he shook off the nagging distrust of the Air Toa’s mind.

“Nothing has been lost,” the Fire Toa said firmly. “The protodermis has given us the power to protect our people from any danger and to heal the land. Once we were Toa – but now we are far, far more.” He raised his magma sword, reveling in the power surging through him. “Now and forevermore, we are – the Toa Nuva!”

The cheers of the other Toa Nuva rose into the air. Mata Nui had been injured – but soon it would heal. The Toa Nuva would see to that.

And they would see to it that Makuta never again troubled this beautiful island – if he even bothered to try. Was this the end of their battles against the darkness? Tahu wondered.

Not the end, Toa. The words hung in the air – not as if they’d been spoken, but as if they’d always existed, independent and alone. This is only the beginning.