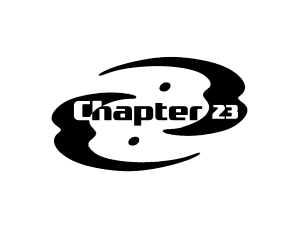 Suddenly a claw spun into view, pinning the Fear-Rahkshi’s arm to the wall just before its clawed hand closed around Takua’s leg. It was one of Toa Pohatu’s mighty climbing claws!

The other two Rahkshi charged toward the Toa. Onua slammed his fists outward into the cavern walls. The section of ceiling directly over the Rahkshi collapsed, piling rocks and stone dust over them.

Breathing a sigh of relief, Takua pulled himself up to safety.

In the courtyard cavern, Tahu swiped his swords at Lewa, who dodged them easily. Tahu lunged at Lewa again.

Rocks rained down on him from the ceiling, mixed with snow. Suddenly a stream of water struck Tahu from behind.

Howling with anger, he turned to find Gali behind him.

“Tahu,” she called. “Remember who you are! Remember your destiny.” She unleashed another stream of water. Tahu’s armor steamed as the cool water hit it.

He jumped in surprise as a shape plummeted to the ground behind him. Kopaka! The Ice Toa touched his blade to the ground. A layer of frost washed over the ground, trapping Tahu in a thick coating of ice.

Lewa stepped forward. He and Kopaka each took one of the frozen Tahu’s arms, carrying him toward an exit tunnel.

Gali looked around for the others as she raced after them. She saw Onua’s quake-breakers smash through the stone of a collapsed foundry entrance and breathed out with relief as he and Pohatu emerged into the courtyard chamber.

Lewa and Kopaka carried the unconscious Tahu into a tunnel. Gali followed. Once inside the tunnel, she turned back to check on the others’ progress. Pohatu and Onua raced across the chamber toward her. They were steps from safety when there was an ominous rumble. A split second later, the entire cavern collapsed on top of them.

Gali gasped in horror. “Our brothers!” she cried as rocks and earth rained down, burying everything in a deep layer of debris.

She tried to leap out, to go help. But Kopaka stopped her.

He gave her a somber look. Gali returned the look for a long moment, then glanced out at the caved-in courtyard area. There was no sound, no movement except the settling dust.

She bowed her head sadly and turned to follow the others.

With a grunt and a clatter, Pewku pulled herself up and out of the top of the chimney. She fell to the snowy ground outside with a sigh of relief.

A moment later, Takua clambered out after her. He flopped to the ground, exhausted. He wished he could just lie there, sleeping in the soft snow. But he knew that he couldn’t do that.

Pewku grunted questioningly as Takua climbed to his feet. “No time to rest,” he told her. “We’ve got to find Jaller. Come on!”