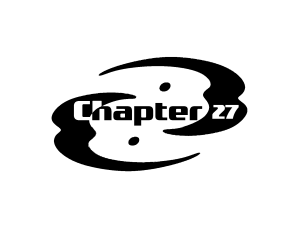 A few hours later, Takua, Jaller, and Pewku stopped beside a small tunnel entrance dug out of an icy mountainside. Takua leaned closer to read the writing on a battered old totem that marked the entrance.

“Onu-Koro,” he read. He glanced at Jaller. “It doesn’t look like it’s been used in a while. And we don’t have a lightstone.”

Jaller held up the faintly glowing mask. “Who needs lightstones?”

He led the way into the tunnel. Pewku followed. Takua hesitated, then climbed down into the darkness after them.

The tunnels were too low to allow the Matoran to ride Pewku, so all three of them walked along on foot. Takua was lagging behind. He didn’t want to admit it, but being underground made him nervous. It was too still. Too close. And much, much too dark.

Suddenly, he spotted two other Matoran coming through the tunnel – one tan and one gray.

Takua turned to greet them. “Hey, look at these leaves I found! I’m going to play a joke on Jaller with them.”

“Takua, we’re trying to find a refuge for all the Matoran, where we can be safe,” the gray Matoran said. “Do you know of such a place?”

“Oh, I’ve heard the stories,” Takua responded. “But with Rahkshi on the loose, anybody out searching for it might wind up Makuta bones!”

“Can’t you give us any hints?” asked the tan Matoran.

“Wellllll… if you haven’t already tried Onu-Koro, you could ask there. Otherwise, you might find the Turaga at Kini-Nui. They would know. In the meantime, I have to help Jaller find the Seventh Toa. Jaller’s the Herald, you know.”

Since they’d already been to Onu-Koro, the two Matoran decided to return to Kini-Nui.

Having bid farewell to the two travelers, Takua continued making his way through the tunnels.

Takua stopped short. Was he hearing things? He peered into the darkness behind him. But there was no sign of life or movement.

By the time he turned around, Jaller and Pewku had disappeared.

Takua gulped. That time he’d definitely heard it. But who? Where? Why?

He wasn’t sure he wanted to know the answer. “J-Jaller?” he called, racing forward. “JALLER!

In the blinding dark, he crashed into a wall and fell.

Suddenly an eerie red glow lit up the tunnel. A pair of red eyes appeared in the dimness.

“Shadows are everything,” a voice hissed. “And where they are, so am I.”

Takua backed away from the eyes. His heart was pounding. The Makuta. It had to be. “I know who you are,” he said, trying to keep his voice from quavering. “I-I’m not afraid.”

“Even my shadows cannot hide your fear,” Makuta said. “Or the truth.”

“That you will not find the Seventh Toa. And deep down, you know it.”

“So I won’t,” Takua said uncertainly. “Maybe Jaller will.”

“And if he doesn’t?” Makuta’s voice was more ominous than ever. “He will die, because of you. Bring me the mask, Takua. Bring it to me and you won’t lose your friend.”

Takua was horrified. Was this his choice? Betray all of Mata Nui – or allow Jaller to die?

Makuta is said to be the master of lies, he thought. Maybe this choice is a lie, too…

“N-no!” he cried, trying to sound bold and sure. “I won’t let everyone down.”

“You fail them more if you refuse,” Makuta said. “For the mask, your villages and Jaller will be spared. Don’t be a fool.”

Suddenly a flash of light flooded the tunnel. “Hey!” Jaller’s voice called from somewhere ahead. A second later he and Pewku appeared. “Keep up, kolhii-head,” Jaller chided. “I found some better tunnels!”

Takua stared around wildly. But there was no sign of Makuta. Unable to speak, he merely nodded and followed as Jaller and Pewku turned and headed down the tunnel again.

“So where’d you wander off to?” Jaller asked over his shoulder as they walked.

“What about it?” Jaller asked. “You ready to take it? Finally?”

“What?” Jaller exclaimed, clutching the mask, which faded slightly. “Why?”

Takua could only shake his head hopelessly “I… can’t explain,” he croaked.

Jaller frowned. “Oh, that’s just great,” he said angrily. “First you stick me with your duty and then you ditch me?”

Takua couldn’t meet his friend’s eyes. “My duty is to myself,” he muttered, turning away. “I quit. Just take the mask and go.”

At that moment, the last of the mask’s light faded. “Fine,” Jaller said. At his words, the mask’s glow returned – at least a little. “But I won’t give up. I will find the Seventh Toa, whether you’re the true Herald or not.”

Pewku stood still, staring first after Takua and then Jaller. She turned and followed Takua.

Makuta watched Takua’s retreat from his lair deep beneath the tunnels, his red eyes glowing with anger. “My fairness spurned…” he hissed, turning toward the giant mask of Mata Nui on the wall. “My gentle sons bound in ice.” He glared at the mask. “So, my hand is cast.”

He turned to face three stone pillars, nearly identical to the ones from which the Rahkshi had emerged. As Makuta walked by them, three shadowy forms burst out of them.

“Now I must pierce that which the Toa hold dear,” Makuta said. He stopped in front of one of the new figures – another Rahkshi, this one white in color. Its name was Kurahk – the Anger-Rahkshi. “Anger among them will threaten their precious unity.”

Makuta walked on. This time he paused before a Rahkshi that was as black as night. Vorahk – the Hunger-Rahkshi.

“Hunger will consume their duty,” Makuta said as the creature’s staff quivered with energy.

The third Rahkshi was colored in fearful shades of red. This was Turahk, the Fear-Rahkshi.

“And fear will keep them from their destiny.” Makuta turned away from the three new Rahkshi, once again facing the still mask of Mata Nui. “They will not disturb your sleep.”

A short distance away, on the shores of a frozen glacial lake, the setting sun’s rays touched the end of a staff protruding out of the ice. As the last light faded and dusk fell, the staff and everything else fell into dark shadow.

For a long moment, nothing moved. Then a flicker of dark energy burst out of the end of the staff. The ice around it splintered and began to crack and melt.

Hahli walks along the Ta-Wahi path. Eventually, she comes to a pathway leading down to the beach, but something catches her attention further down the path. Approaching it, she discovers it to be the Charm of Strength. Further still, there is a large structure featuring a carving of a Toa head. Walking up the steps, Hahli notices that there is a doorway with a riddle and keyhole on it. Hahli fits the appropriate Charm in each of the keyholes, whose riddles read: ‘Conquers Fear’ (Courage), ‘Pride Of Guards’ (Duty), and ‘Might Of Heart And Limb’ (Strength). After she unlocks the final door, Hahli enters a chamber filled with a pool of lava and a walkway leading to a dais in the middle of the pool. Arriving at the dais, Hahli discovers the final Crystal, the Crystal of Courage.