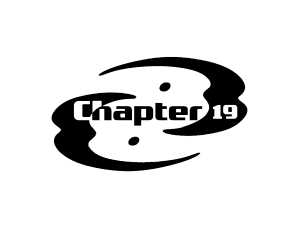 The three Toa scrambled out of the way as the Vahki soared through the opening. The last one carried the barely conscious Nokama. Whenua tapped the Vahki on the shoulder with his earthshock drill. When it turned, Vakama grabbed it from behind as Onewa snatched Nokama from its grasp.

The Toa of Stone knew the shaft was going to be no place for Nokama. He swung out through the hole and dug his proto piton into the wall. Now the problem was, which way to go? Up meant running into Visorak, down meant Vahki, Rahi, and Mata Nui knew what else. Maybe it is not so much a question of where I go, as how fast I get there, he decided.

Down seemed the better option. Vahki and Rahi he knew… Visorak were something unknown. He was more than willing to postpone the pleasure of meeting them until all six Toa were together and ready for a fight.

Throwing Nokama over his shoulder, he began the long climb down the outside of the Moto-Hub. His attention had to be totally focused on the descent. One wrong move would doom them both. Concentrating, he never saw the three Visorak that slipped from their web and began to climb down after him…

Matau and Nuju peered over the lip of the hole and were shocked by what they saw. In the few moments they had lain there stunned, a full-scale battle had erupted between the Toa Metru, the Vahki, and the Lohrak. So far, the Lohrak seemed to be winning easily.

The Toa of Air had yet to change back to his normal form. Nuju glanced over and found it disturbing to be side by side with a 10 foot long serpent. “Change back,” he said.

“Why?” answered Matau. “Maybe I like being a giant snake. No one would dare to give me grief-trouble now!”

Nuju slowly and deliberately aimed his crystal spike right at Matau’s serpent head. “I would, and it wasn’t a request. Change back.”

The Toa of Ice shrugged. But instead of launching a blast of ice at Matau, he simply created a thin sheet so clear that it served as a mirror. Then he directed the Toa of Air to look at the reflection of his new face.

One glance and Matau said, “Think I will quick-change back to handsome me.”

As the Toa of Air mentally switched off the power of the Mask of Illusion, Nuju rose to his feet. “Good idea. We have to help Vakama and Whenua, and there’s no point in giving the Vahki two Lohrak to worry about.”

“Don’t I always? You are the transport expert – tell me, why do Le-Metru airships only fly so high?”

Matau thought for a moment before replying, “Safety. Fly too high-sky, and then you go straight down, because…” He grinned. “Because ice forms.”

Nuju nodded and sent waves of frost out of his Toa tools toward the Lohrak. Its wings were soon covered with a thick coating of ice. Despite the creature’s great strength, it could not compensate for the added weight and keep them beating. Nor could it use its sonic scream to clear them without destroying its own wings. Sensing the trouble was confined to the shaft, the Lohrak used its powers to blow a bigger hole in the wall and forced itself out into space. Vakama saw it turn in midair and head for Ta-Metru, no doubt seeking a source of heat to melt the ice.

If Nuju was hoping the Vahki would pursue, he was disappointed. Apparently, four Toa Metru close by were worth more than a Lohrak on the wing. “I’d hoped we could avoid a fight,” said the Toa of Ice.

“We can,” answered Matau. Without another word, he summoned a cyclone in the shaft. The winds swept up Vakama, Whenua, and the Vahki, lifting them higher and higher toward the opening at the top. Matau crouched down, eyes fixed on the rapidly rotating shapes in the whirlwind. At just the right moment, his hands darted into the windstorm and snatched the wrists of Whenua and Vakama.

Seeing what he was doing, Nuju raced over to get a grip on the two Toa as well. Once certain they were both secure, Matau shut down the cyclone. Startled by the abrupt halt, the Vahki plunged down into the darkness. A few moments later, a resounding crash signaled that the machines had landed.

“That’s what’s missing from Metru Nui these days,” said Matau, hauling Whenua and Vakama up out of the shaft. “Not enough crash-bang.”

The three white Visorak spiders watched as Onewa and Nokama vanished underground. This breed of Visorak, known as Suukorak, generally preferred high altitudes where the air was crisp and cold. Roporak were far better suited for a subterranean hunt, but they were gathered on the other side of the Moto-Hub. The Suukorak would just have to proceed, or else report to Roodaka that they had allowed Toa to escape. She would no doubt order them bound up in their own webbing and hung out as bait for flying Rahi.

Shuddering a little at the thought, the Visorak marched in single file after their prey.

Onewa laid Nokama down gently, then tried to get his bearings. They were in the Archives, that much he knew, but carvers rarely bothered to visit this place. He had no clue which direction to travel in or what might be lurking nearby. Whenua would know, but the Toa of Earth was back in the shaft. Everything in Onewa told him that he should go back now and help the others, but he knew that wasn’t what they would want. They were counting on him to stay free, and Nokama with him. If anything happened, they might be the only Toa left to carry out the mission.

He waited impatiently for the others to arrive. Nokama stirred. Onewa went to help her to her feet. “Easy. You took the brunt of quite a blast.”

“I’m all right. Where are the others?”

Onewa heard the hatch open up above. “That must be them now. I guess they finished off that overgrown rock worm.”

The Toa of Stone turned to greet his friends. Instead, he found himself face to face with a Suukorak. A spinning wheel of energy erupted from the creature’s back and struck Onewa. Instantly, a field of electrical force surrounded the Toa. It did no damage, but moved with him wherever he went. Worse, the more he tried to break away from it, the faster it began to shrink around him.

Onewa could see the creatures’ true plan taking shape through the jagged bolts of lightning. Rather than challenge two Toa, they locked one up inside a prison of electricity so they could focus on the other. As he watched, they spat streams of webbing at Nokama, which she barely blocked with her hydro blades.

Inevitably, despite her skill, some got through. The webbing wrapped around her ankles, toppling her to the ground. The Suukorak moved in.

Then they suddenly stopped dead. An instant later, Onewa heard voices – it was the other Toa! He glanced up toward the hatchway for only an instant. When he brought his eyes back to Nokama, all three of the spiders were gone as if they had never been there.

The electrical field faded as Vakama and the others entered. Nokama was already struggling to rip the webbing off herself. In answer to the Toa’s questions, Onewa said he was pretty certain they had just met Visorak in person.

“They ran off when they heard you coming,” said the Toa of Stone. “Nasty, but not very brave, I guess.”

“No,” said Whenua. “Don’t think that. First thing you learn as an archivist is you can’t judge Rahi behavior by what we do. That’s a good way to wind up a deceased archivist.”

Nuju could see Onewa was readying a wise-crack. He spoke quickly and cut the Toa of Stone off. “Then what do you think happened, Whenua?”

“I think they heard us coming and withdrew rather than risk a fight they might lose,” said Whenua. “Why take the chance? We’re not going anywhere. They have all the time they need.”

“You talk like they are making plans,” Onewa replied. “They’re just Rahi.”

“Rahi who have taken over the city,” the Toa of Earth said quietly. “Rahi who are powerful enough to frighten beasts five times their size. Three of them almost defeated two Toa Metru, Onewa, and there are hundreds of them out there… maybe thousands.”

“All the more reason to keep moving,” said Vakama. “We’ll work our way through the Archives until we are close to the Coliseum. Then we can get our job done.”

“What if these Visorak are in the Coliseum too?” asked Matau.

“I doubt it,” Vakama answered. “My guess is that the Vahki are still guarding the place. We will deal with them and get the Matoran out before the Visorak know what we are doing.”

The team headed into the Archives, with only Matau lagging a bit behind. I hope you are right, Toa-brother, he thought. But somehow I know you’re wrong.