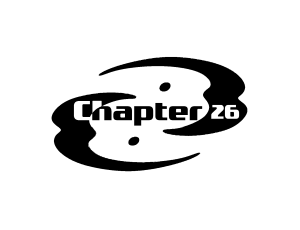 Garan was about to die.

He could feel the intense heat of the lava and his hands losing their grip on the smooth stone of the floor. He realized with surprising calm that the dark gray rock and the fingers of his left hand might well be the last things he ever saw in this life. In his last moments, he voiced a hope that Balta would take over for him as leader and drive the Piraka from Voya Nui’s shores.

His head hurt. At first, he thought it was caused by the proximity of the molten inferno that waited for him. Then he realized it was a sound that was piercing his brain, barely audible yet potent nonetheless. He had heard that sound before. What was it?

The sound increased in volume. He wondered if this was some final torture of Vezok’s before the end.

Now the mind-shredding vibration was replaced by a different sound, that of a stone wall shattering into rubble. Rock and dust rained down on Garan. He looked over his shoulder to see one wall of the Chamber of Truth gone and four Matoran standing there.

Balta got a running start and made a successful leap over the gap in the floor. As he started to help Garan up, the Onu-Matoran spotted Vezok coming up behind the others. Giving a yell, Garan fired his pulse bolts, striking the Piraka square in the chest and sending him flying.

Balta and Garan leapt toward safety, just barely catching a handhold on the rock. Piruk, Kazi and Velika scrambled to help them up. Vezok had already recovered from Garan’s initial attack and was heading back toward the group.

The Piraka charged, his massive arm coming down to deliver a blow to Piruk. Balta shot between him and his target and raised his twin repellers. Vezok’s fist met the weapons and he was immediately flung back, struck down by his own power.

“Go! Run!” yelled Balta. All five Matoran broke for the foothills. By the time Vezok’s senses returned, they were gone.

Once they were sure they were not being pursued, the members of the Matoran resistance stopped and caught their breath. Garan looked around and noticed not all were present. “Where’s Dalu?”

“I don’t know,” Balta replied. “She wasn’t there when I woke up. Maybe she escaped before they brought us to the Chamber of Truth.”

Piruk shook his head. “The Toa Nuva are almost certainly dead. The Piraka would not leave them alive. It’s hopeless.”

Velika smiled. “There once was a Matoran who was stricken with thirst. He left his shelter to seek out his water bucket, but when he found it, it was dry. Puzzled, he lifted it up and discovered a hole in the bottom had let the water leak out. Angry that his thirst could not now be quenched, he cursed the bucket, cursed the island, and cursed his need for water. So frustrated was he that he never noticed water had begun to fall from the sky.”

There was a long silence. Finally, Kazi sank his head into his hands and said, “I know I am going to regret asking this… but what does that mean?”

“It means don’t get so caught up in looking for salvation from one direction that you miss seeing it coming from another,” said Garan. “The Toa Nuva may be captured, or they may be dead. But six new stars appeared in the sky – and six new Toa walk this island.”

“What makes you think they will fight any better than the Toa Nuva did?” asked Piruk.

Garan recalled the image of the six Toa Nuva, battered into unconsciousness by Brutaka. It had been the last thing he had seen before darkness claimed him as well. “All I know, Piruk, is their fate cannot be any worse.”

Nuparu wasn’t sure whether to shout with joy or scream with terror.

Just after he and the other new Toa had left the cave, an idle thought crossed his mind about his Kanohi mask. A second later, he was flying high above the rocky ground, swooping and diving like a manic Gukko bird. For someone who had spent virtually his whole life laboring in underground tunnels, it was exhilarating and horrifying at the same time.

Down below, the other Toa watched him, eyes wide with shock. Behind his mask, Kongu could not keep the resentment off his face. After all, he was the best Gukko rider on Mata Nui – if anyone got a Mask of Flight, it should have been him.

“What’s he doing up there?” asked Hahli.

The answer came to Kongu almost immediately. “He doesn’t know how to safe-land.” There was more, but he chose not to share it. Ever since he had triggered his mask power for Jaller, he had been unable to turn it off. His mind was now full of the babble of everyone else’s thoughts. Jaller was worried they had plunged into more than they could handle; Hahli was struggling to remember all that Toa Nuva Gali had taught her; and Hewkii was a little upset no one had commented on the fact that his armor had turned from brown to yellow when he became a Toa.

Nuparu banked at the last moment and just avoided smashing into a peak. Convinced someone had to do something before they wound up short one Toa, Jaller turned to Matoro. “Can you use your ice power to, I don’t know, hold him in place for a second and –”

The Toa of Fire stopped abruptly. Matoro was lying on the ground, completely still, as if he had just been struck dead. Jaller, along with the others, rushed to his side. Nuparu’s plight was now forgotten.

“I don’t know,” said Jaller. “I don’t think so. What could have happened? We were standing right beside him. No one could have attacked.”

“No, I don’t understand it either,” said Hahli. Jaller looked up to see that she was facing away from Matoro, apparently having a conversation with empty air. He wondered for a moment if Hahli had gone crazy.

“Just relax,” Hahli continued. “We’ll figure this out, I promise.”

“Figure what out?” said Hewkii. “Who are you talking to?”

“Well, she thinks she’s happy-talking to Matoro,” reported Kongu. “Which is obviously ridiculous, since Matoro is over here and isn’t much of a conversationalist right now.”

“You’re wrong,” said Hahli. “Only his body is over there. His spirit is floating in the air over here, and no, I don’t know how it happened. Matoro thinks it has something to do with his mask. He says there are five Matoran not far away who are looking for us.”

“How does he know?” asked Jaller, rapidly running out of patience with this increasingly bizarre situation.

Hahli glanced down at the ground before answering, clearly realizing the others were about to think she had lost her mind. “Um, well, he says he flew through the mountains… straight through the rock, like it wasn’t there… and he saw them… but they couldn’t hear him or see him.”

Hewkii, Jaller, and Kongu looked at one another, then looked at her. Finally, Kongu muttered in disgust, “Sure. He’s flying, Nuparu’s flying, everyone’s flying but the one who knows how to fly.”

Jaller frowned. “Can he reverse… whatever happened?”

Hahli turned away from the others and said, “Try.”

On the ground, Matoro suddenly stirred. The light in his eyes flared to life. He jerked awake like someone emerging from a very bad dream. “What? Where? Mata Nui, what a dream…”

Hahli knelt down beside him. “I don’t think it was a dream. I saw you, even if the others didn’t.” She smiled. “And that’s some power you have.”

“I’m not sure I want to know what my mask does,” Hewkii remarked. “It might turn me into a Le-Matoran or something.”

“You wish,” Kongu shot back, managing a grin.

Jaller ignored them, focusing on Matoro. “Which way are these Matoran? Keep in mind, we can’t walk through solid rock.”

Matoro pointed to the north. “They’re scared, Jaller, of something or someone called ‘Piraka.’ I got the feeling they are the only Matoran on the island still free.”

Jaller helped the new Toa of Ice to his feet. “Let’s go find them. The more I find out about this place, the more worried about the Toa Nuva I become.” 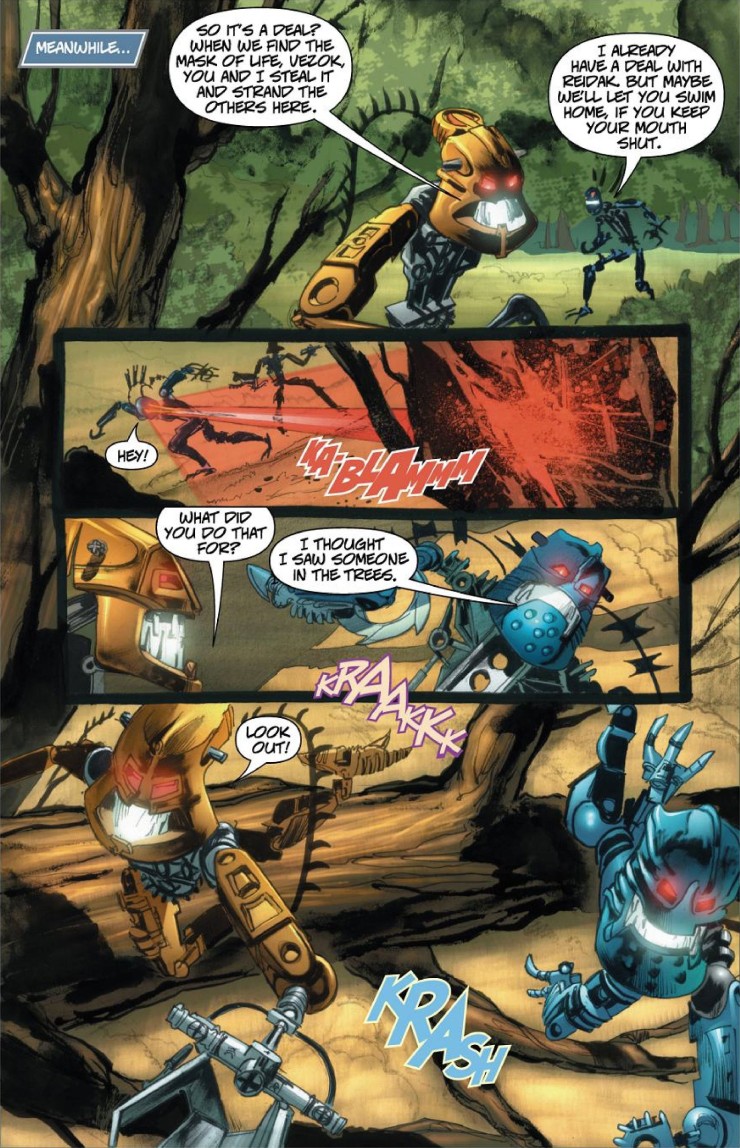 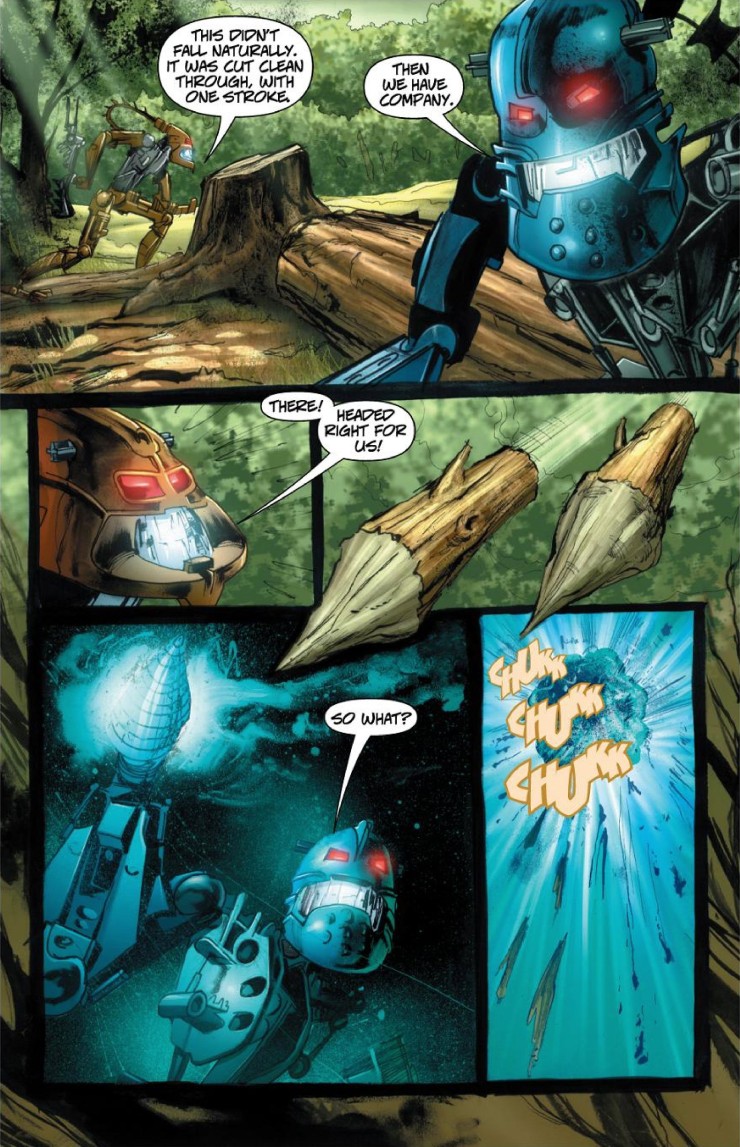 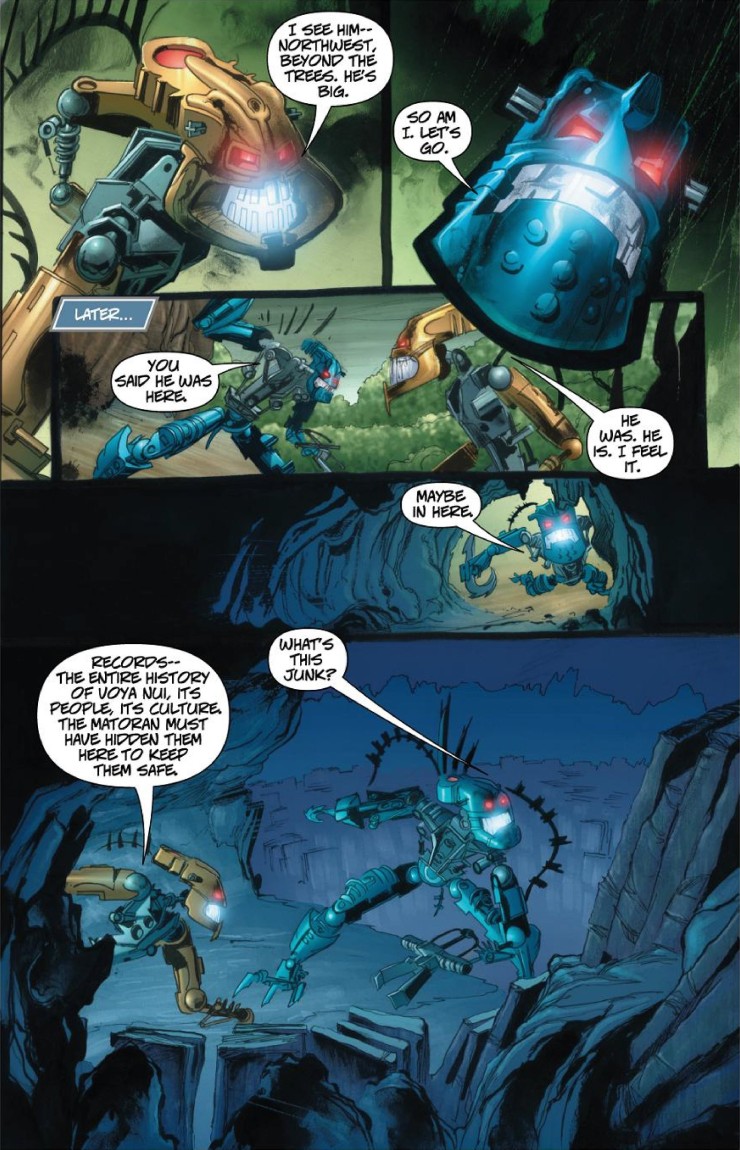 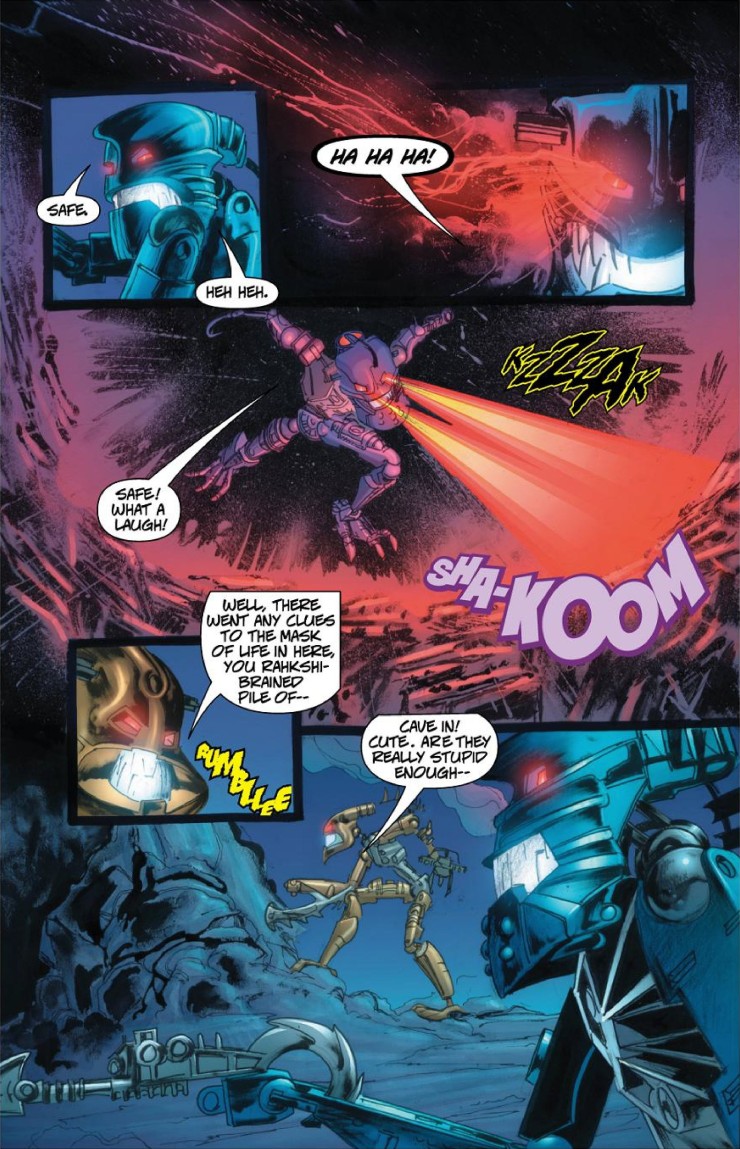 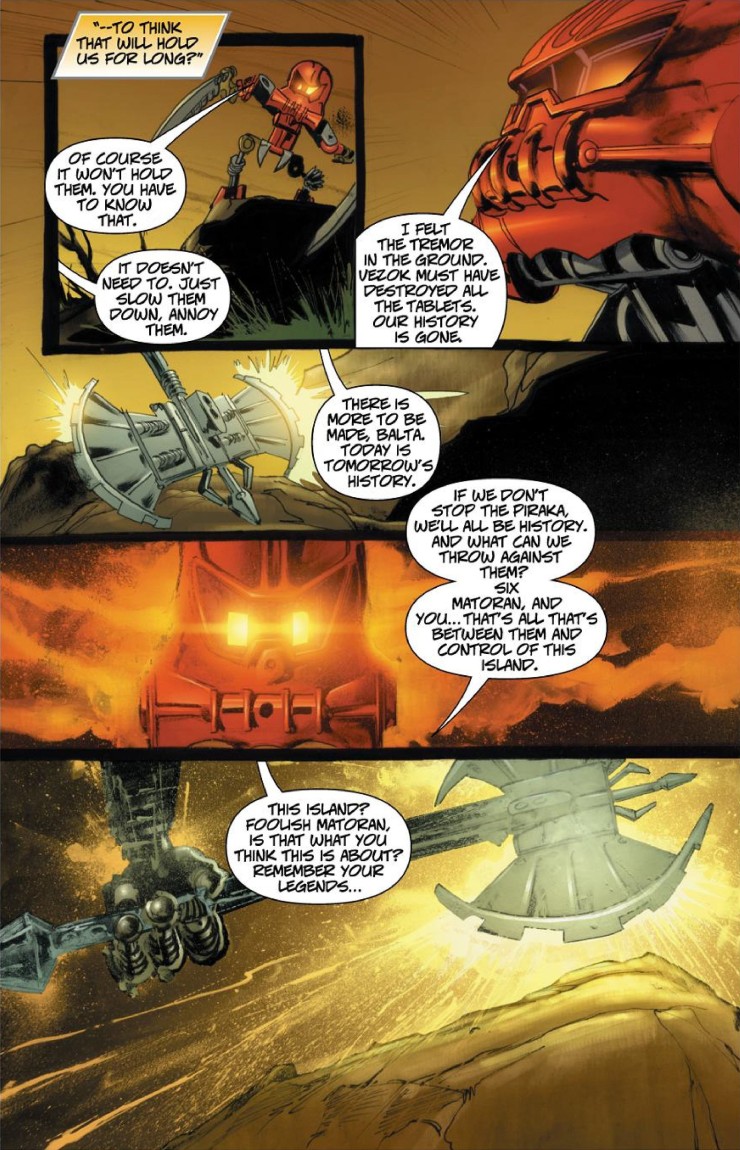 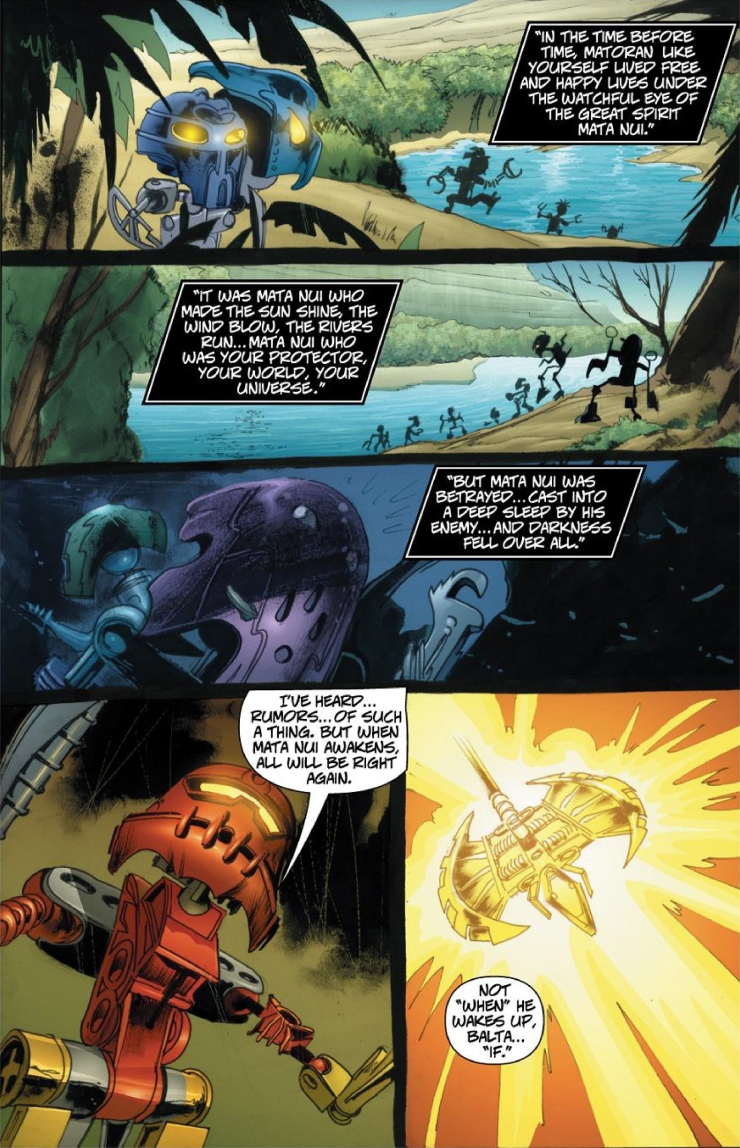 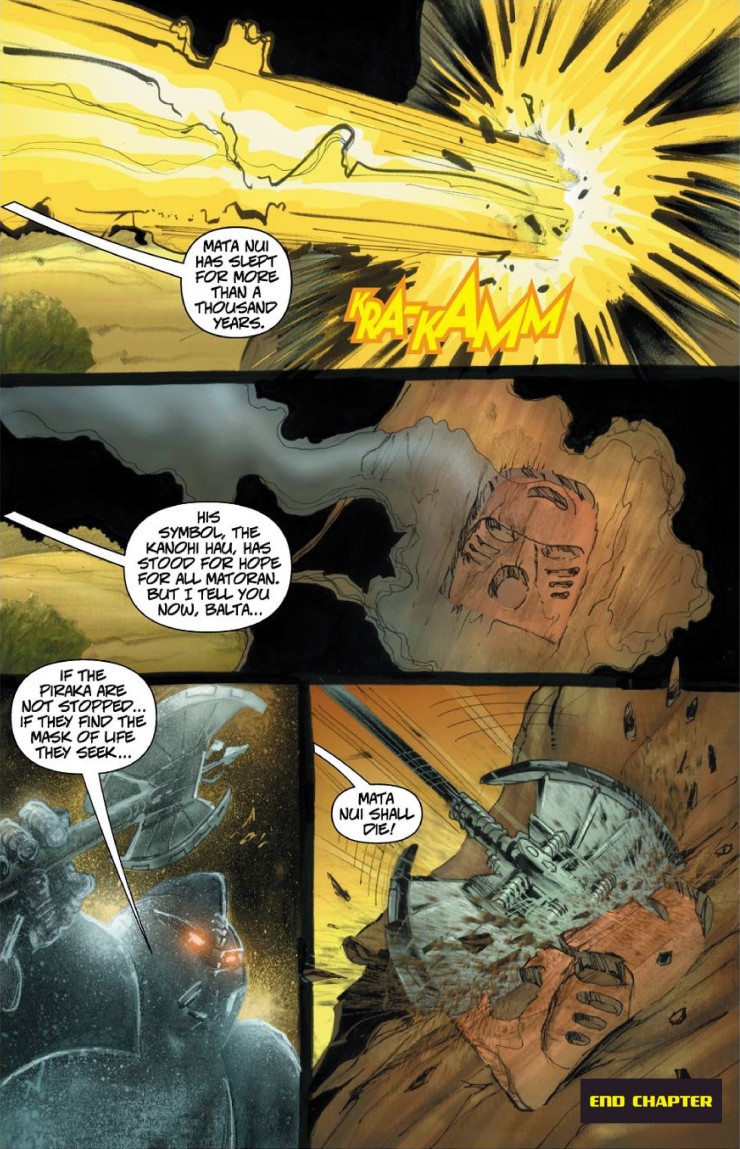