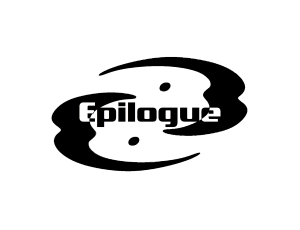 “…a Toa who saved a universe.”

Hahli stopped speaking. Unsure if she was done, Kopeke waited. It seemed as if she had forgotten he was there. Then a sad smile suddenly flashed across her features.

“I’m sorry, Kopeke,” she said. “I was lost in memory. That is all there is to the story. You can carve it on the Wall of History now.”

“Is he truly dead?” asked the Chronicler.

Hahli nodded. “He is. But his life force brought Mata Nui back from the endless dark. So you could say that Matoro is a part of everything now – the sky, the waters, the sunlight, and every living thing that walks or flies or swims or crawls. Matoro is dead… but never truly gone… not as long as the Great Spirit Mata Nui exists.”

In the depths of the Pit, Hydraxon swam alone.

He could not explain all that he had seen in just the last few moments. Mahri Nui destroyed; some other island slicing through the water on its way to who knew where; Toa chasing and being chased; and the Barraki and the armies now turning on each other in frustrated rage.

Nor was that the last of the mysteries. Far below, he saw a gleam of red armor. Nearby, Spinax prowled the sea floor, clawing at the earth as if on the trail of something. Hydraxon dove down to see that the armor did indeed belong to Maxilos. But it was lifeless now. What had happened to the Makuta who had possessed it? Was he dead? Had he simply abandoned the robot body when it became damaged beyond repair? Or was there some other explanation? Hydraxon didn’t know.

There was, in truth, a great deal which remained a mystery to him. He would never know that he had once been a Matoran named Dekar before the Mask of Life transformed him, giving him the likeness, powers, and memories of a long-dead hero. He would never realize that his lifelong friends had been safely concealed in the depths of Voya Nui, on their way to begin a new life without him. Perhaps it was best that way… ignorance would spare him the pain of brooding on all that he had lost.

Hydraxon gathered up the pieces of Maxilos. He would take the robot somewhere and repair it. And then they would go back to work tracking down runners and bringing them to justice – for there was no other life for either of them.

As he had for so many centuries, Mata Nui slept on.

Turaga and Matoran had wondered for countless ages whether the Great Spirit could sense what was going on in his universe while he slept, or even if he dreamed. Now the answers to these questions could be revealed.

Mata Nui had been aware of the doings in his realm only in bits and pieces over the past millennium. He had sensed his own impending doom, and the absence of the Mask of Life from its accustomed place. In a way he couldn’t explain, he knew that Toa had raced to save him from destruction. He felt his own death and his sudden rebirth.

And yes, he dreams now, though he had not done so in the past. Perhaps it is the result of his brush with non-existence, or perhaps something else brought on the images he views. But dream he does – long, torturous nightmares in which darkness claims the world and all who live in it and even the Great Spirit is helpless to prevent it. They are agonizing visions from which he cannot awaken.

And so, one of the most powerful beings in existence can do nothing but hope to someday wake up and find his dreams were only dreams… and nothing more.

Tahu, Toa Nuva of Fire, scaled the rocky hillside that led to the fortress of Artakha. Behind him came his five teammates, all strangely silent, as if awed by their surroundings.

It was hard not to feel that way. The island of Artakha was a hidden land whose location had been kept secret for thousands of years. It was said that all those who had any inkling of its location had long ago been hunted down and eliminated. Only after a recent series of quests had the Toa Nuva been given information on how to find the island, and that by a mysterious figure whose face they never saw. He had told them only that they would find something vital to the success of their mission – the awakening of Mata Nui – at the fortress of Artakha.

The island had at first seemed lush, tropical and inviting, with happy Matoran hard at work building structures, then taking them apart and rebuilding them. A gleaming fortress stood high atop a grassy hill, the sunlight reflecting off it almost blinding in intensity.

In an instant, everything had changed. The Matoran dropped their tools and ran for shelters. The sky turned dark and rain fell in sheets. The land transformed from green fields and dense forest to a landscape of twisted, dead plants, rocks, and mud. The fortress shifted as well somehow, becoming a black and forbidding place that would make even a Makuta tremble.

“Gali, Lewa, can you do something about this storm?” Tahu yelled, trying to make himself heard above the wind.

The Toa Nuva of Water and Air both nodded. Combining their powers, they attempted to dispel the raging thunderstorm overhead. After a few moments, they gave up, defeated.

“Whatever is causing this is greater than our powers can deal with,” Gali said. “Do you think this is the work of Artakha himself?”

“If it is, he and I are going to have a long deep-talk,” said Lewa. “Fine way to treat guests.”

They had reached the massive iron doors of the fortress. There was no sign of a knocker or any other way to signal their presence. As it turned out, none was needed.

“Who are you? Why have you come here?” The voice was indescribably ancient, and yet young at the same time. It came from everywhere around them – the fortress, the rocks, the trees, even the air itself.

Tahu took a deep breath. This had to be Artakha talking to them. It wasn’t easy to know how to answer a legend. Artakha was rumored to be the greatest builder and designer in the universe. Some of the greatest artifacts known, from the Mask of Light to the Mask of Shadows to the Nuva masks he and his friends wore, were said to have come from Artakha’s forge. Yet, if the stories were to be believed, no one had actually seen Artakha in all the millennia of his existence.

Maybe that is about to change, thought Tahu.

“Does the sun know its light?” the voice responded. “You have come here to find arms and armor for your fight. I tell you that the weapon you need cannot be found here – that must be sought in the world that feeds the world. As for the other…”

The storm suddenly abated as quickly as it had arisen, replaced by a cold wind that made even the Toa Nuva of Ice shiver. Sleet and snow began to fall, half burying the Toa in a matter of moments.

“Tell me what you have done on your path to this place,” said the voice of Artakha.

“Are we here to play games?” Kopaka Nuva responded. “Your name is spoken with respect in a thousand places, Artakha. I begin to wonder if those who honor you have been deceived.”

Artakha’s laughter was like thunderclaps. “You amuse a being who was already weary of life when you first set foot on solid ground, Toa. And there is iron behind your icy facade – that is good. You were made far better than anyone knew. But my question still needs answering.”

Tahu swiftly described the Toa Nuva’s most recent adventures, including the freeing of the imprisoned Bahrag, the downfall of the realm of Karzahni, and the assault on the island of the Dark Hunters. Artakha said nothing, merely listened.

When Tahu was finished, there was a long period of silence. Then the snow and sleet were gone, replaced by warmth and sunlight. When the ice melted away from the Toa, it left behind gleaming masks and armor on the ground at their feet.

“You have done all that has been asked of you, and more,” said Artakha. “You have earned these masks and armor. Wear them well, for they are perhaps my greatest creation. Wherever you journey, they will adapt to your surroundings. No terrain, no climate, no wind or wave will ever again be your master.

“Now you must leave here. The time has come at last for the Great Spirit Mata Nui to awaken – and you must be the ones to bring him back to those who need him.”

“Come with us!” said Onua Nuva, Toa of Earth. “Your aid would be welcome, Artakha.”

“No,” said Artakha, even as the Toa Nuva’s vision began to blur. “Where you travel, you must travel alone.”

A moment later, the island of Artakha was gone – or so it seemed. In fact, the Toa Nuva had been transported from the island by the power of its ruler. When their vision finally cleared, they were in midair, high above a strange Matoran village. Somehow, their armor had shifted in a hundred ways, making it possible for them to stay aloft. But there was no time to wonder about that – all around them, a battle raged in the sky.

“Go, Toa Nuva,” the voice of Artakha echoed throughout this new land. “Go and find your destiny at last!” 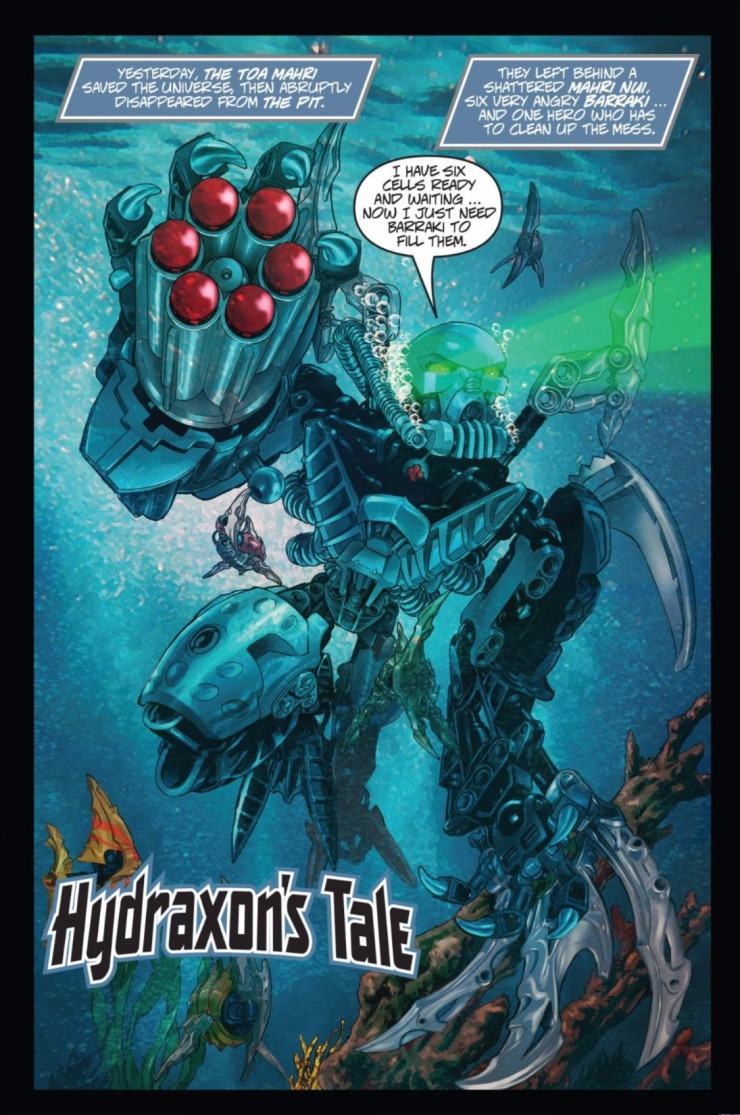 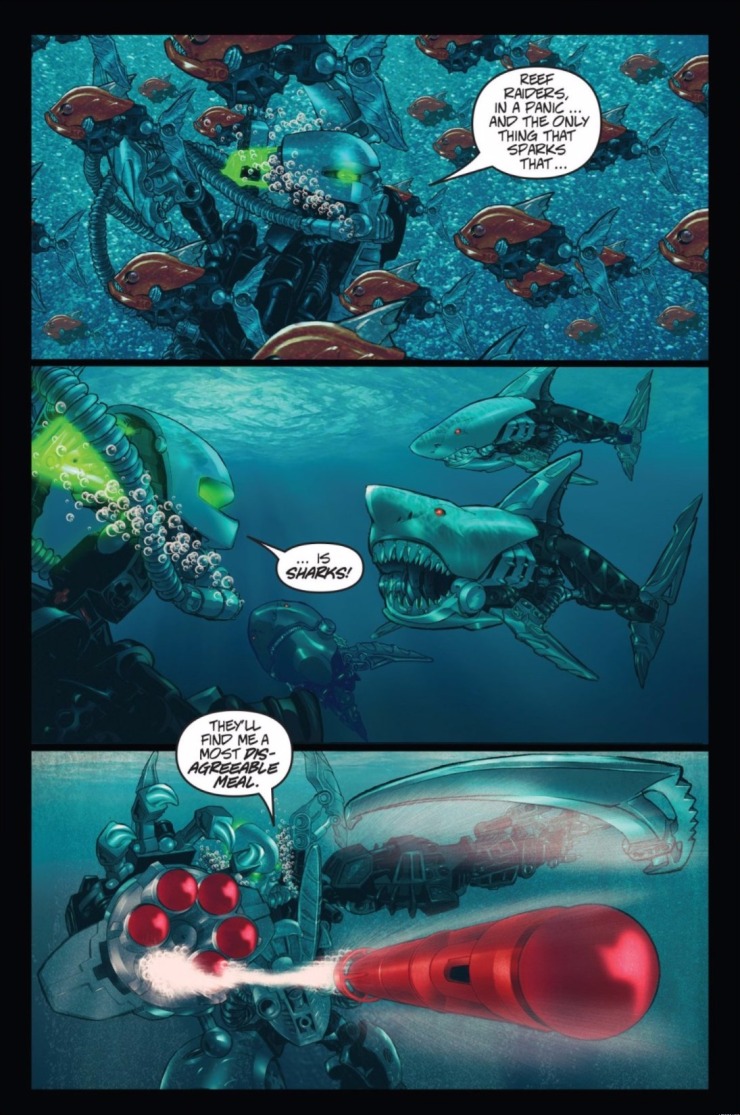 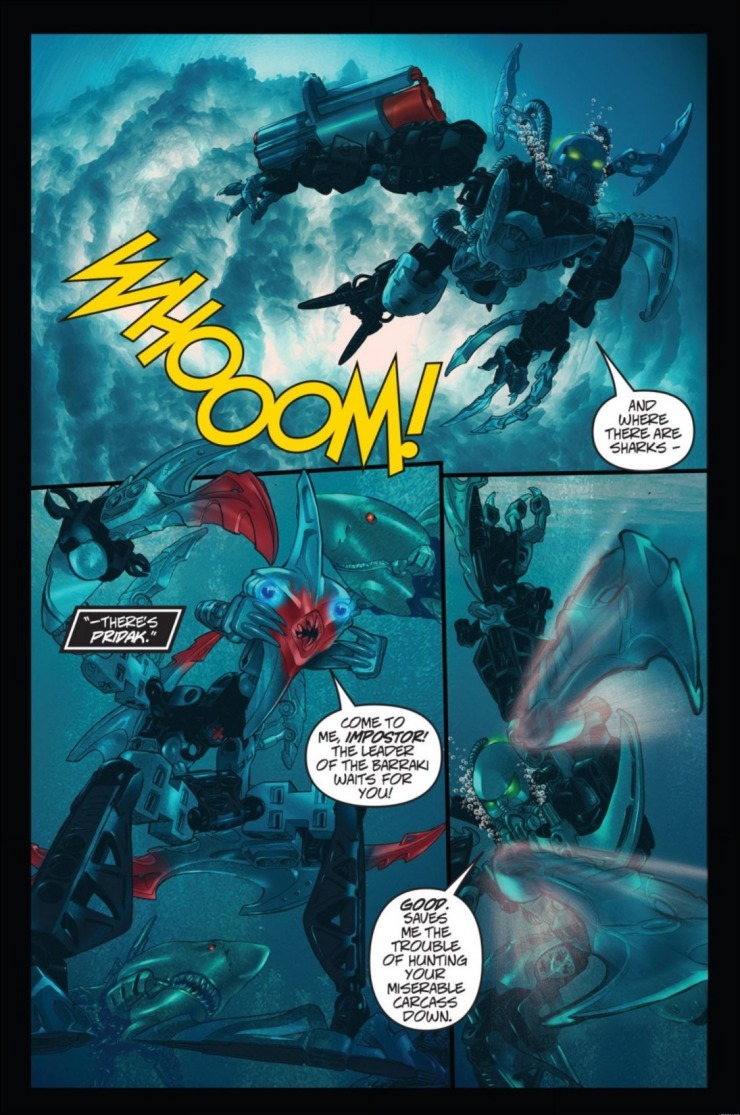 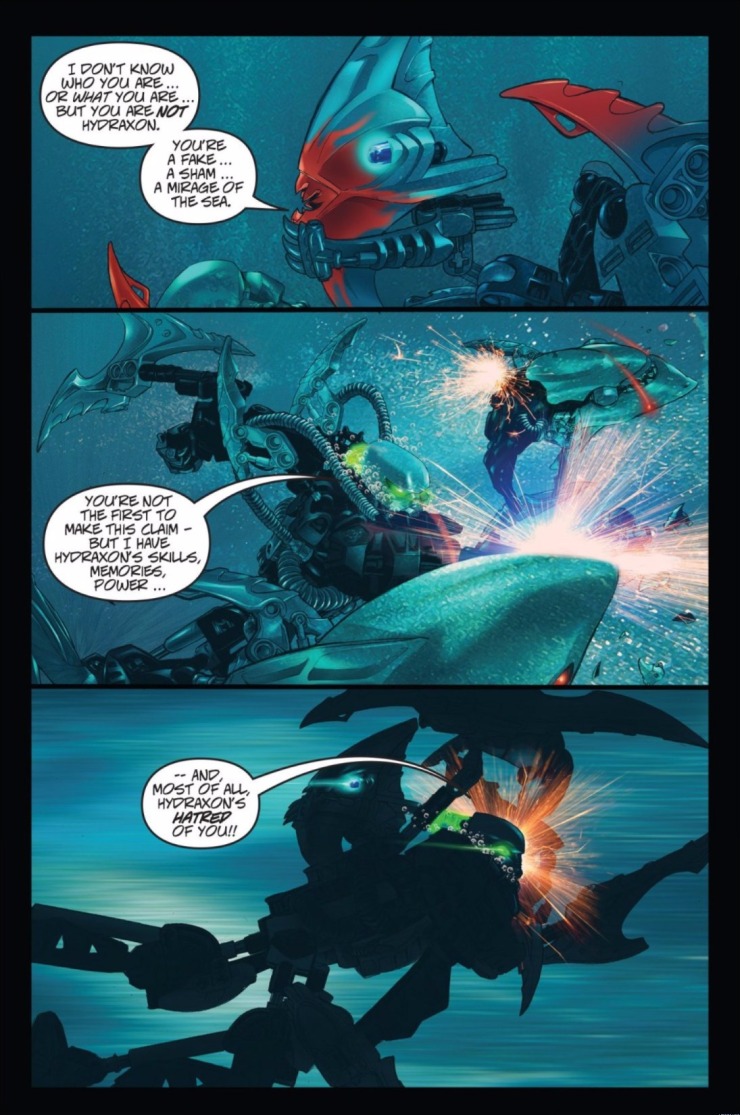 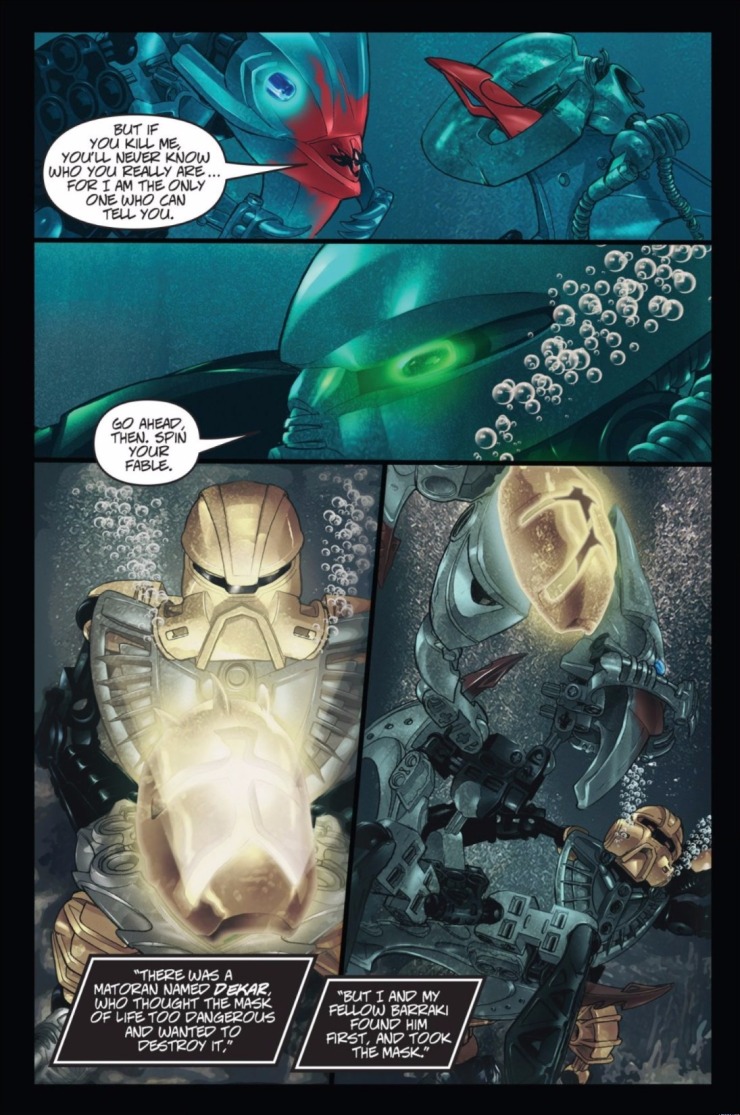 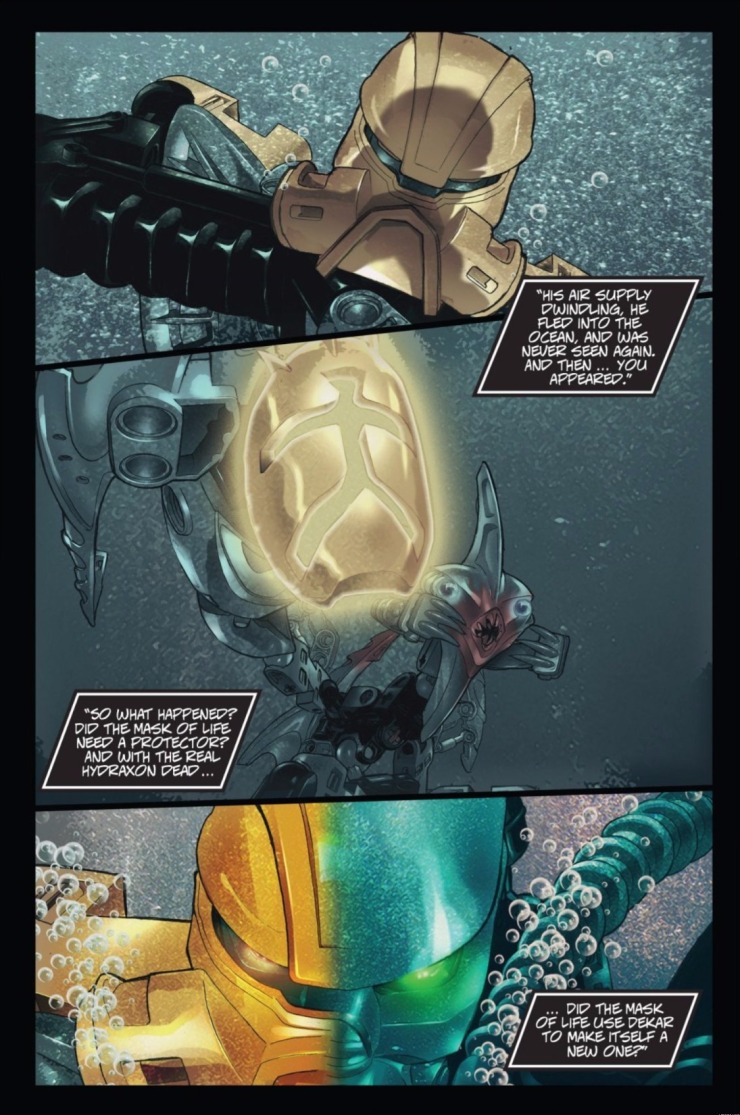 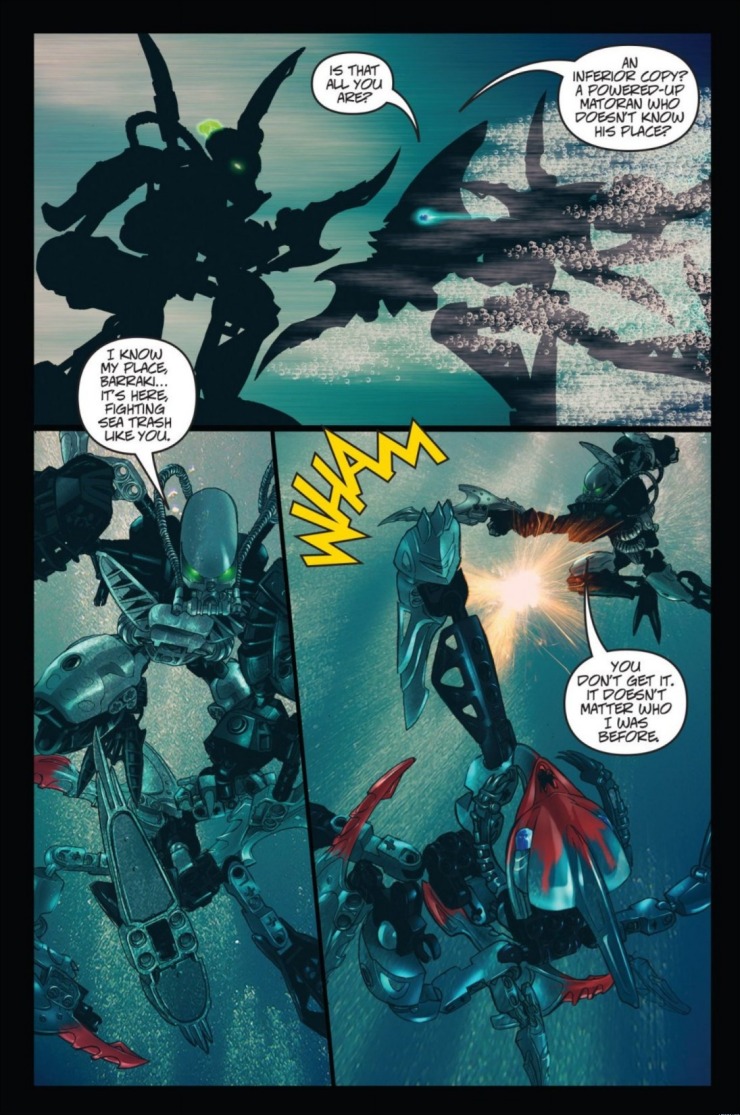 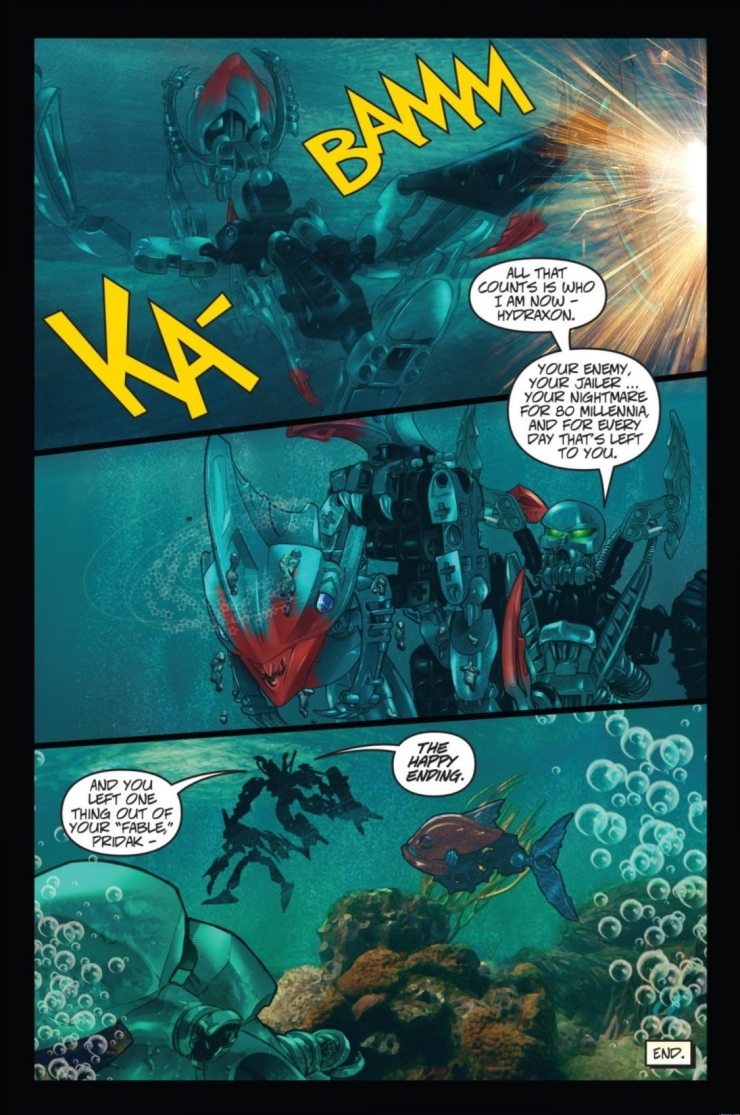