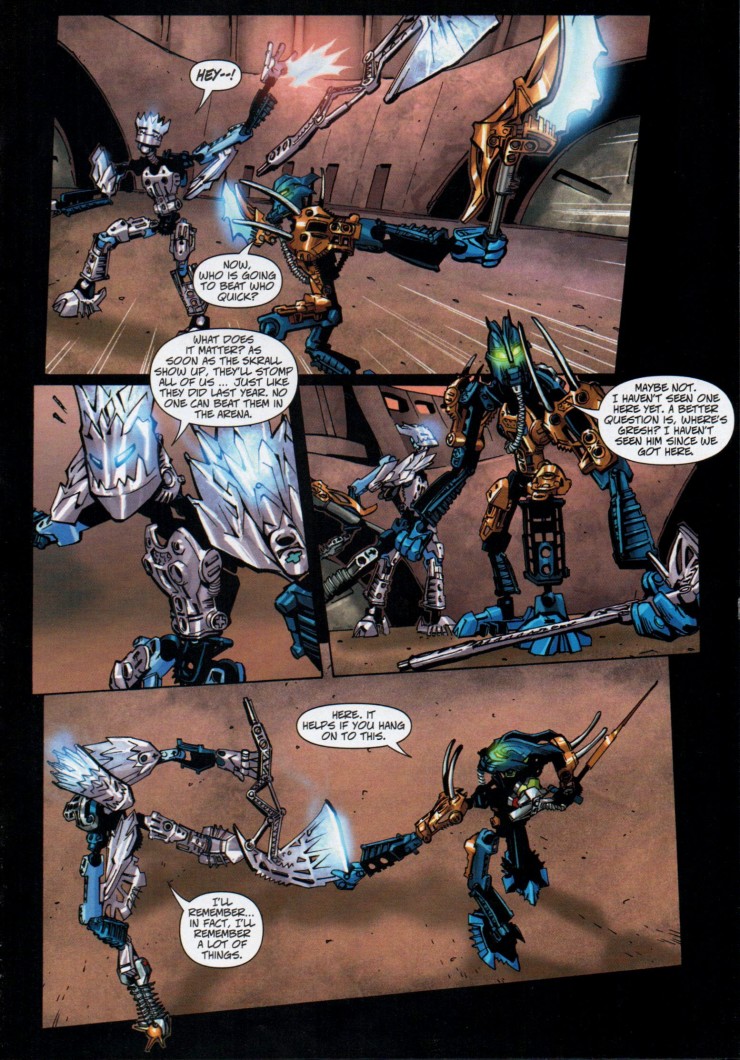 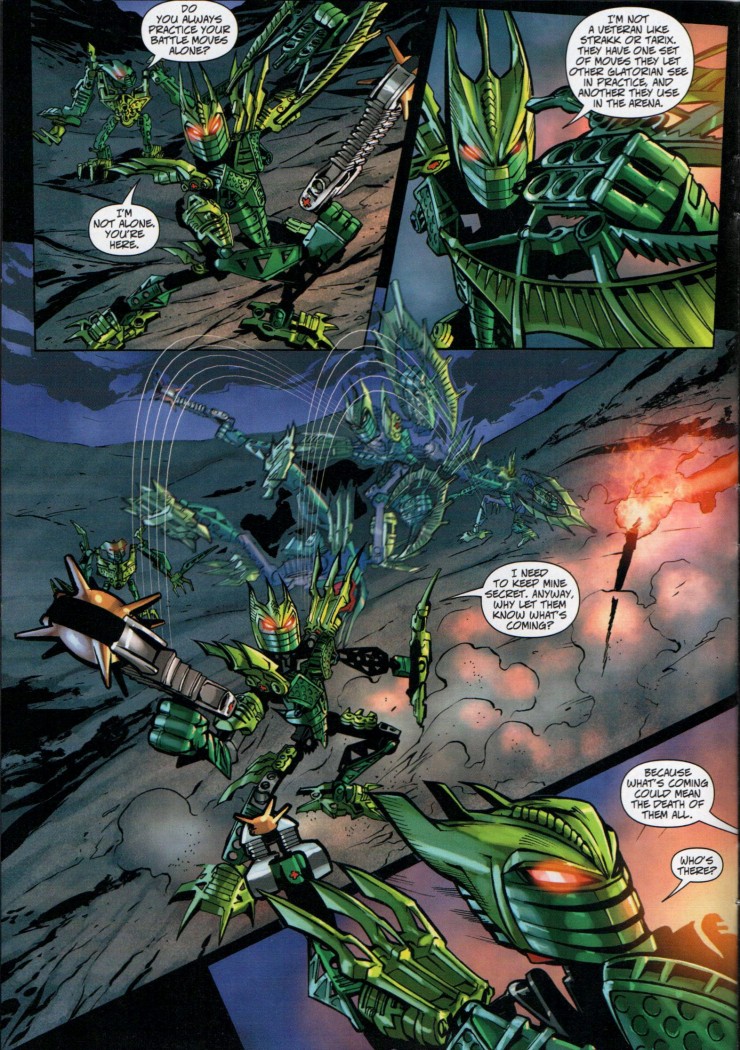 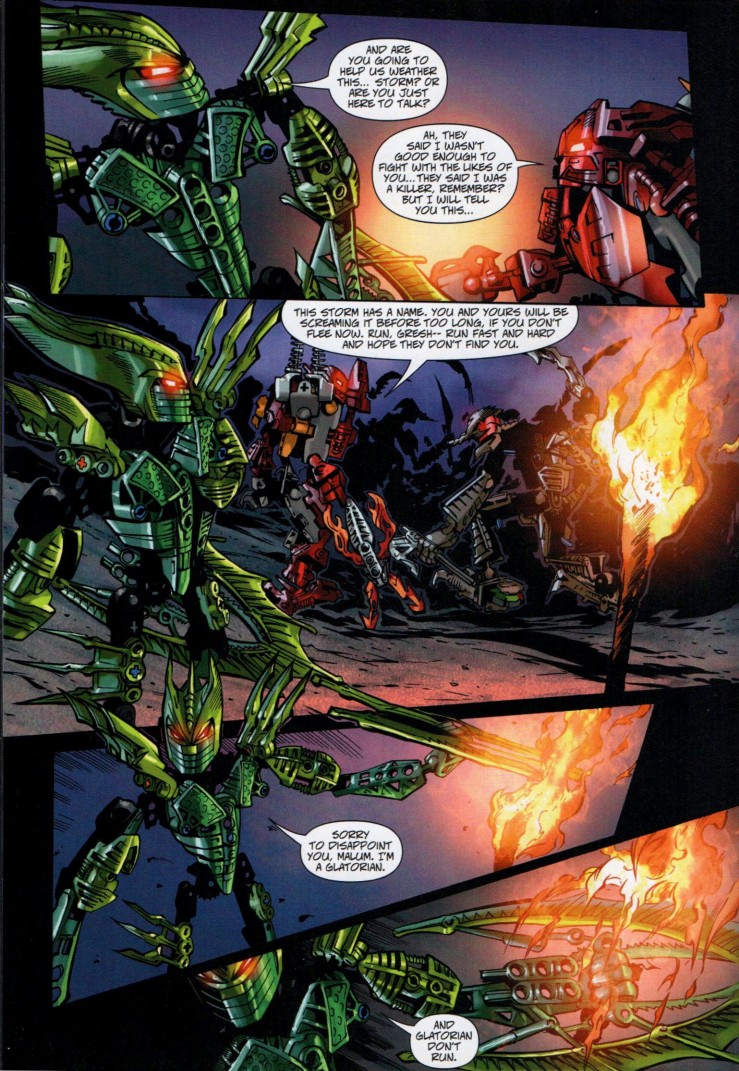 In the end, only Kirbold was willing to come along with Crotesius and Tarduk in search of the Red Star. Scodonius said it was crazy to go off on some wild Rock Steed chase so close to the date of the tournament, and Kyry was in a hurry to get back to Vulcanus.

“Vehicles can’t go where we’re going, even tracked ones,” said Tarduk. “Plus they make noise, and noise attracts Bone Hunters. No, we’ll use Sand Stalkers.”

It took a certain amount of wheeling and dealing to borrow three of the beasts from an Iconox trader, especially since Tarduk wouldn’t say where they were going with them. But within a short time, the three Agori were mounted and ready to start their expedition.

The shortest route would be to go east to the Dark Falls, and then north toward the volcanic region above the Black Spike Mountains. But the presence of Skrall, Vorox, and Bone Hunters up that way made it also the most dangerous. So Tarduk led the small party northwest, past the village of Tesara and Elbow Peak and into the White Quartz Mountains. Kirbold, being a native of Iconox, knew this region fairly well – there were paths that traders took through the peaks in search of anything of value they could sell.

It was cold here, even worse than the desert by night. More than once, the Sand Stalkers almost lost their footing on the smooth face of the crystalline rock. Although it made all three Agori nervous, they had to travel by day – it would be too easy to stray off the path in the dark and possibly tumble right off a cliff.

After two days, they had moved far enough north that they were in completely unfamiliar territory. Whatever creatures lived in this region would never have been in the desert to the south, since they obviously thrived on cold. Crotesius was on constant alert. That was why he was the first to notice that they were being stalked.

“Should we stop?” asked Tarduk.

“No,” snapped Crotesius, “that’s the worst thing we can do. We need to go faster. Maybe we can lose them.”

Tarduk doubted it. He had spotted one of their pursuers. It looked a little like one of the wasteland wolves that lived in the desert. Their paws had evolved to be able to traverse across the loosest sand and they were highly effective trackers. But, Tarduk reminded himself, though it looked like one, their stalker wasn’t one of those creatures. For one thing, this beast was half made of metal. Tarduk had never seen anything like it.

“More than one,” answered Crotesius. “Six or eight, maybe. They’re hard to spot.”

Tarduk was unsure how anything could move through the White Quartz Mountains unseen like this. As the day wore on, that became the least of his worries. No matter how fast the party moved, the wolves kept on their trail. No matter what trick they tried to evade pursuit – sending one Sand Stalker off in another direction, doubling back on their own trail, even leaving some of the precious supply of food on the trail to distract the pack – the wolves kept coming. “What are those things?” Tarduk asked for the third time.

Now they had to ride through the night, like it or not. Kirbold shared Tarduk’s mount, and Crotesius led the way. Although it probably wouldn’t matter anyway, Crotesius refused to light a torch, figuring the wolves would see the light. Tarduk argued that they were probably tracking by scent, but it did no good.

They wound up on a narrow, winding trail. On the right side was the face of the mountain. On the left, a sheer drop into darkness. The good news was that there was no place for the wolves to hide here. They would have to follow the trail as well or give up, it seemed. The bad news was that even the Sand Stalkers were having a hard time finding their footing. One slip, and someone wouldn’t be coming back from this trip.

Moving as quickly as they dared, the three Agori made their way down the trail. Once, the mount carrying Kirbold and Tarduk stumbled and one pack of tools fell off and into the abyss. The sound of it striking bottom never came.

Tarduk glanced over his shoulder. He didn’t see anything either, but said, “No, I don’t think we lost them.”

“Neither do I,” agreed Kirbold.

The trail began to widen, becoming more of a plateau. Dawn was breaking, the first rays of light reflecting off the quartz peaks. Crotesius reined his Sand Stalker to a stop, and Tarduk did the same. They looked behind. There was no sign of the half-dozen fur- and metal-covered wolves that had been following them.

“Maybe they didn’t make it across the trail,” said Crotesius, “or they found easier prey. Either way, I’m glad they’re gone.”

“Um, there’s one other possibility,” suggested Tarduk. “They stopped following because they knew they didn’t need to anymore.”

Crotesius turned at the sound of a low growl, a hollow metallic sound that echoed throughout the mountains. Lined up on a ridge ahead were not six of the wolves, but sixty. They had evaded a hunting pack only to ride right into the den.