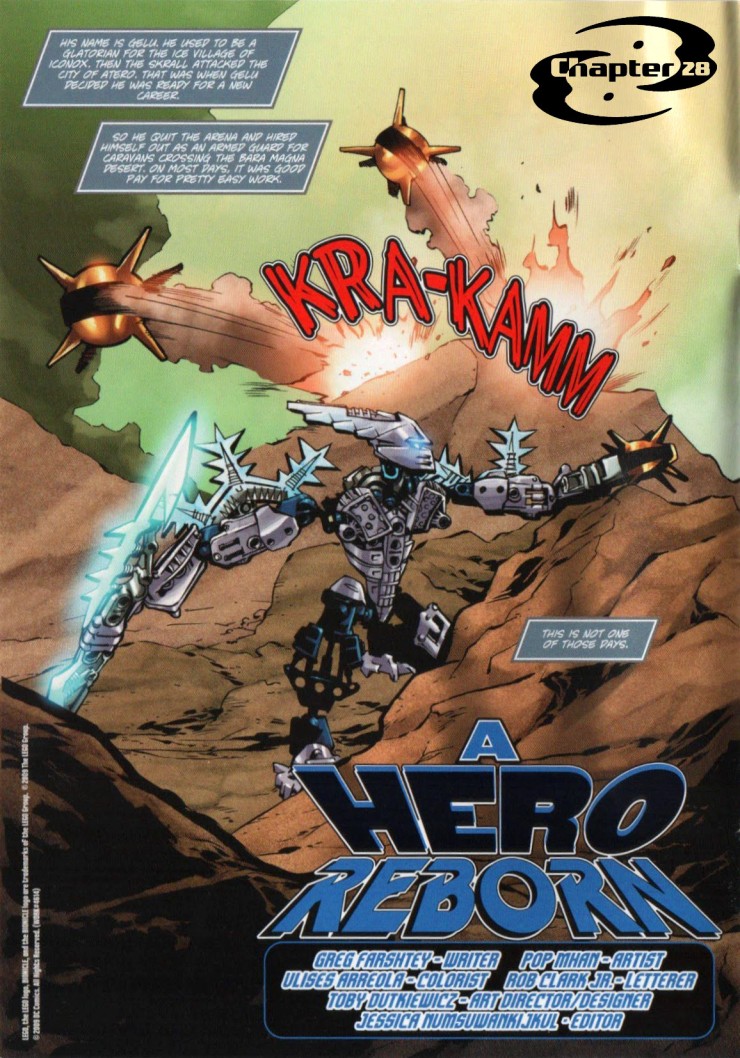 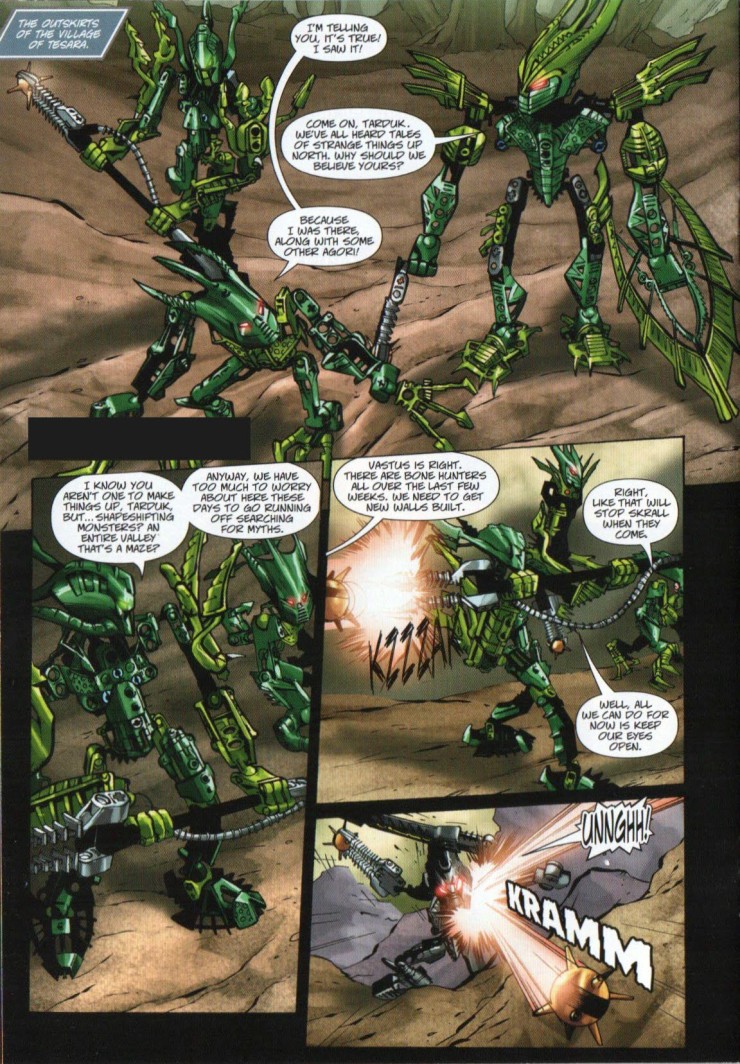 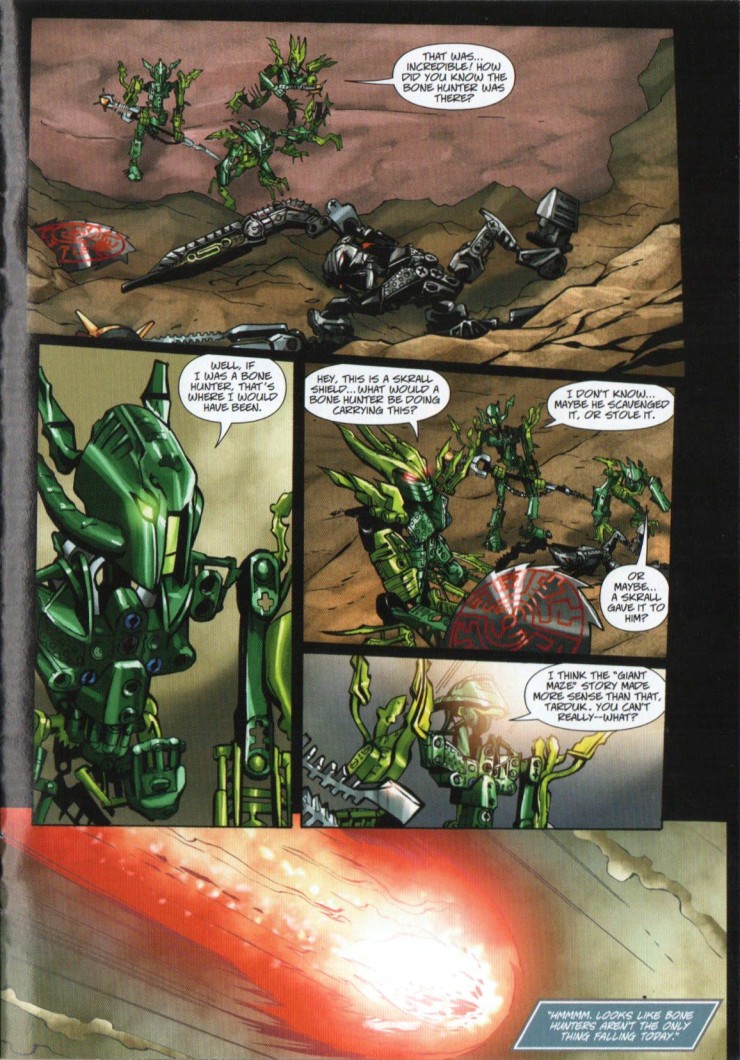 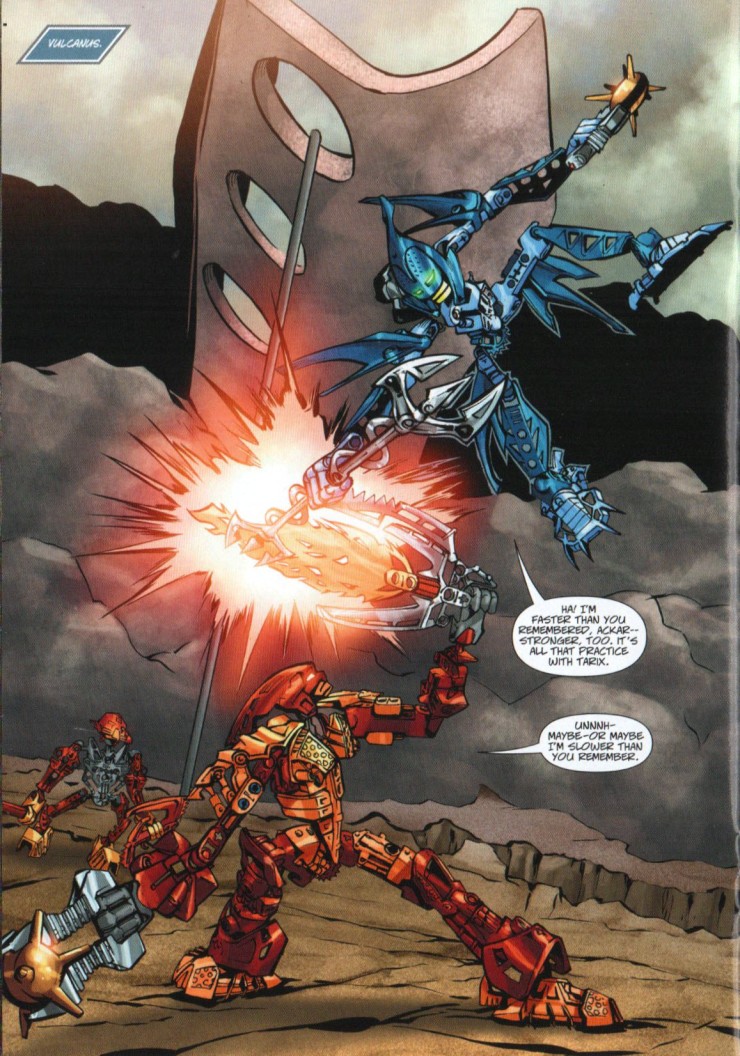 Metus steered his wagon across the desert sands, still marveling at what he had just heard. He had been certain that Vulcanus would be destroyed by the Bone Hunters, and that everyone in it would be killed. How so few Glatorian managed to stop a marauding band of raiders and save the village, he did not know. But the Vulcanus Agori he had run into – a youth named Kyry – assured him it was so.

Some things had changed since the events at Vulcanus, some had not. The Bone Hunters had been badly mauled, and their raids had become less frequent. No one doubted they were out in the desert somewhere, plotting their revenge. Gelu figured that if they hit another village, it would be in much greater numbers to prevent a repeat of Vulcanus. The Glatorian hoped it would take the Bone Hunters a good, long while to assemble that big a force.

Of course, that still left the Skrall to worry about. Since the fall of Atero, they had not mounted any major attacks, but everyone knew it was just a matter of time. There had been plenty of raids by small Skrall squads, mainly to steal resources and capture Glatorian. What they were doing with the fighters they grabbed, no one seemed to know.

The loss of so many fighters was bad for the villages, but good for Metus. There was a bigger need to recruit more fighters, and it meant that the ones he managed could get higher pay for their work. You couldn’t find a Glatorian under every rock, of course, but now and then, you stumbled across someone with real potential – if you knew where to look.

A flash of light in the sky caught Metus’s attention. At first, he thought it was a shooting star. But no, it was too bright for that. Some kind of meteor, maybe? The mysterious object was headed for the desert sands not far from Vulcanus.

For a moment, he dismissed the whole thing. It had nothing to do with him, after all. But then some instinct kicked in – the same instinct that had led him to amazing success so often in the past – and it told him to check this out. Maybe it wasn’t just a hunk of rock from space… maybe it was something really valuable.

What are the odds? he said to himself, even as he drove in the direction of its likely impact. He shook his head, chuckling at himself. What was he thinking? With all of Bara Magna’s troubles, did he really imagine the answer was going to fall down from the sky?

A swarm of scarabax beetles scurried across a sand dune, in search of their evening meal. On most evenings, this hunt was uneventful. The beetles would feed and then return to their underground tunnels. But this night was destined to be different.

One beetle lifted its eyes from the sand and saw something strange. It began clicking its pincers to alert its comrades. Other scarabax joined in, watching as a point of light streaked through the night sky and became a large fireball.

The scarabax scattered. The falling object smashed into the ground and skidded across the sands, carving out a trench as it traveled. The intense heat fused the sand to glass. Finally, it came to a halt on the edge of a dune. Smoke drifted from its metallic surface.

Had anyone been present, they would have guessed that it was some kind of mask. It was golden in color and quite beautiful, despite having been through a long journey and an abrupt crash landing.

A native of Bara Magna would most likely have seen it as a potentially valuable item that could be traded for water or some other needed resource. Even if it was just ornamental, someone would want it to hang on the wall of their shelter. Maybe it could even be melted down and the metal used to make a tool or a weapon.

But the only living things around was a small army of desert beetles. Their only interest was to find out if the object was something they could eat. If it wasn’t, they would most likely turn away and leave it where it lay. Over time, the sands would cover it, and its appearance would be quickly forgotten.

And if that happened, no one on all of Bara Magna would know that the salvation of their world had indeed fallen from the sky…