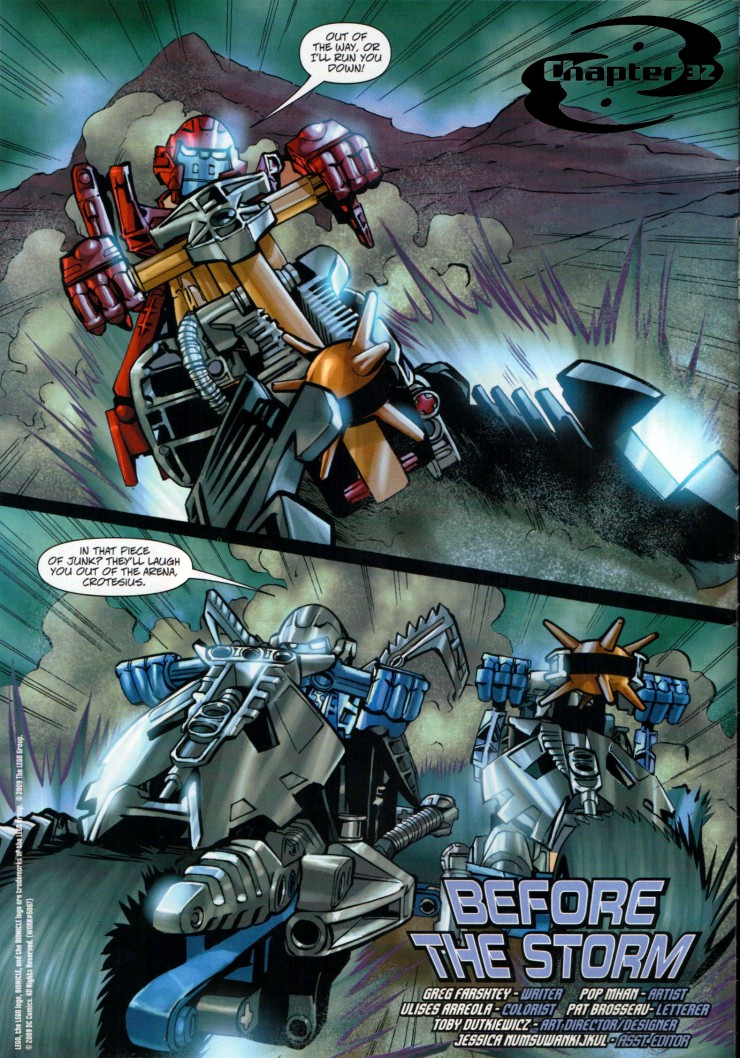 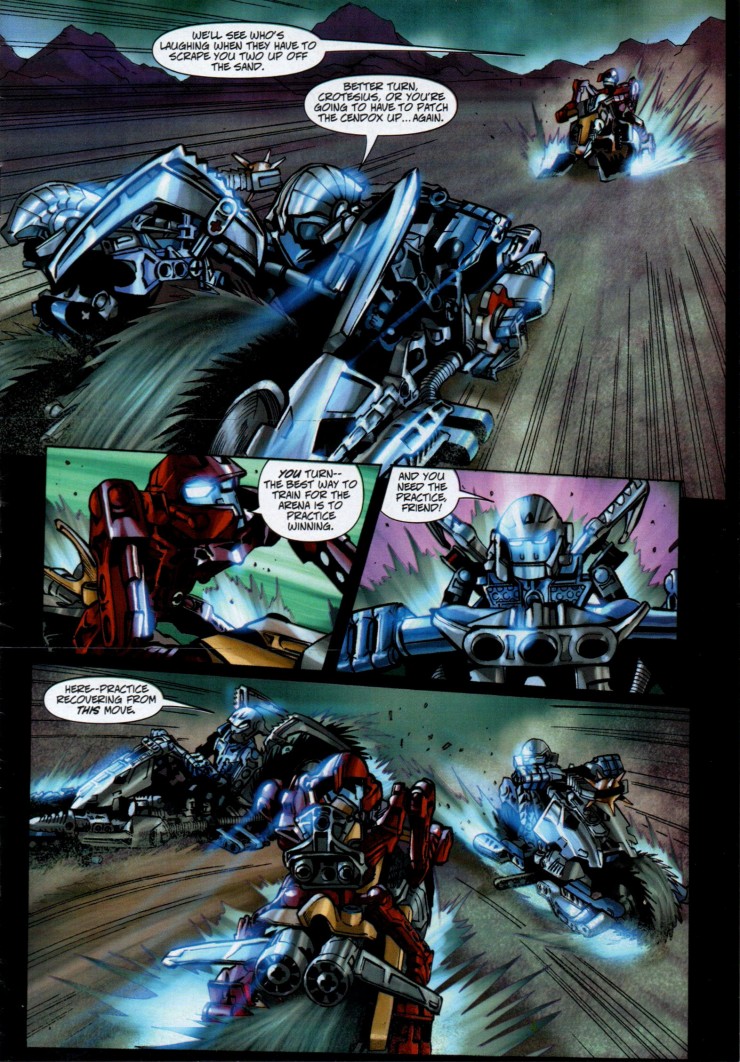 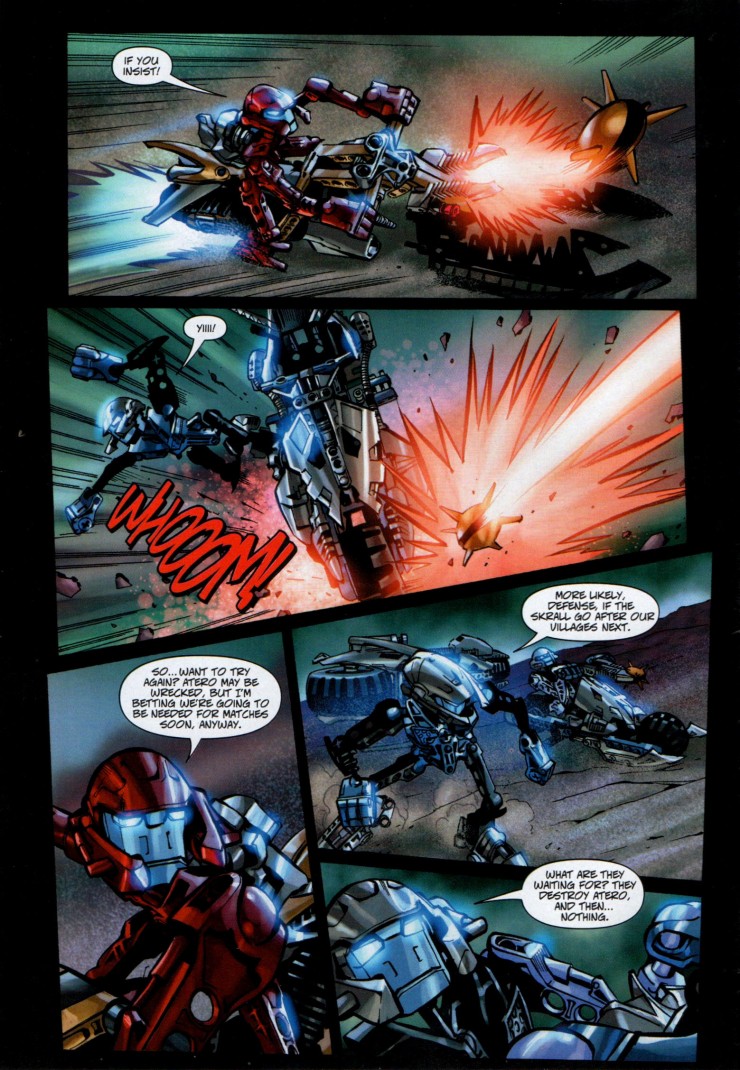 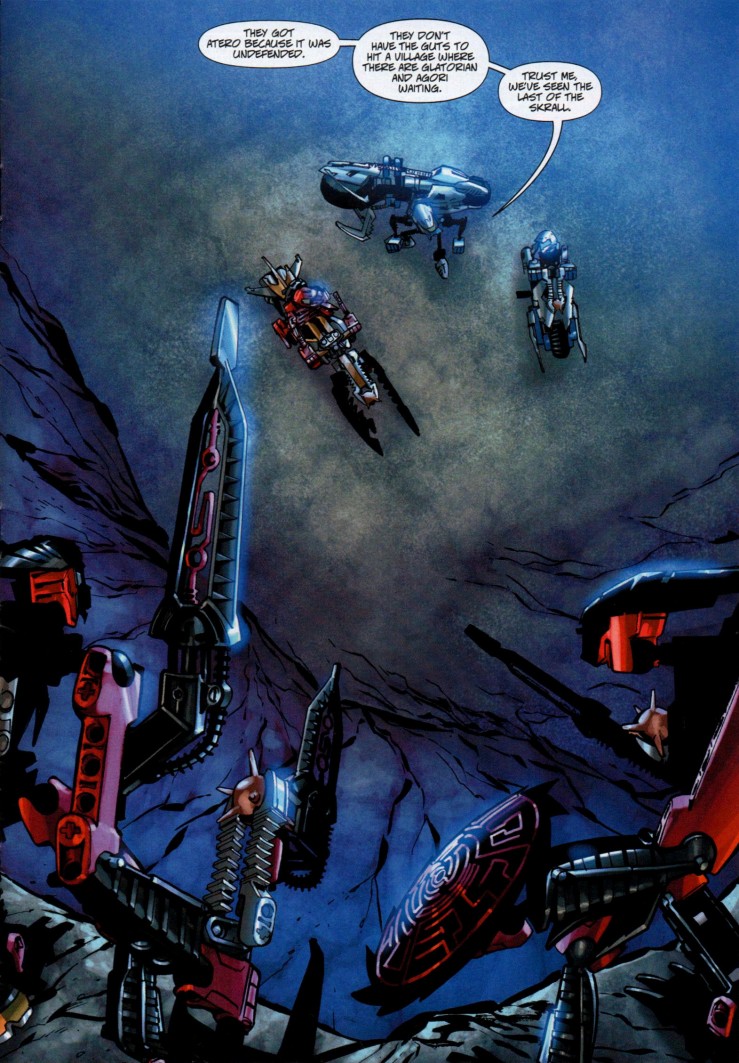 “I don’t like this,” said Ackar. “It’s the perfect place for an ambush.”

The dune chariot had reached the mouth of the canyon. Places like this made the red-armored Glatorian wary. It hadn’t been that long ago that he had helped set up an intricate series of traps in Iron Canyon for a Bone Hunter raiding party. All the skill of the bandits had not helped them at all in a place where they were stuck on a narrow path, being picked off by Glatorian hidden among the rocks above.

This, of course, was a lie, and she knew it. With the element of surprise on their side, Bone Hunters would try almost anything. But she didn’t want Mata Nui to get nervous and decide he wanted off this ride.

Ackar knew exactly what she was doing, and he wasn’t planning to let her get away with it. He owed Mata Nui. If they were going to expose him to danger, he had a right to know what kind and how nasty things were likely to get.

“They’re getting bolder,” he said to Kiina. There was an edge in his voice that said watch it, I’m on to you. “Skrall, too. In the past few months, they’ve seemed to know our every move before we make it.”

“True,” Kiina conceded. “But don’t worry. It’s not like we’ve got much worth stealing. Well… maybe Mata Nui does.”

“I was talking about his blade, bug face,” Kiina snapped at the beetle, and shook her head. “I can’t believe I’m talking to an insect.”

Mata Nui did not crack a smile. “In my experience, when an enemy knows too much, it can only mean one thing: You have a traitor on your hands.”

Ackar nodded. “I was thinking the same thing. But who?”

A low rumbling sound filled the air. The ground beneath the chariot began to shake violently. Then the rumbling became a roar as, up ahead, the earth buckled and heaved.

“I think we have a bigger problem!” Kiina yelled.

The ground exploded. A massive crimson creature rose up on four great legs and let out an earsplitting roar. Mata Nui had never seen anything like it. It was at least forty feet tall, part animal and part machine. Its legs sported massive treads and ended in vicious claws. Sharp pincers extended from both sides of its jagged mouth. When it took a step, the earth shook – and the chariot was headed straight for it.

“Skopio!” shouted Ackar. He had seen this creature once before, from a distance. Getting this close to one was something he could have lived without.

“We should turn back,” said Mata Nui.

“Can’t,” Ackar said, pointing behind the chariot. “They’re even deadlier.”

Mata Nui turned. A group of black-armored riders mounted on reptilian creatures were riding across the sands in pursuit of the chariot. Each held a sword aloft in the air and shouted war cries as they rode.

“What are they?” asked Mata Nui.

“Bone Hunters,” Ackar answered, “and a lot of them.”

“My village – there’s another Glatorian there,” said Kiina, leaning forward in the driver’s seat. “We just have to make it there!”

Kiina turned the wheel and aimed the chariot at the narrow gap between the Skopio’s left foreleg and the canyon wall. The creature’s eyes narrowed and it whipped its leg to the side, blocking the vehicle. Kiina yanked on the wheel, sending the chariot into a skid right in front of the beast.

The Skopio slammed its right foreleg into the sand, missing the chariot by centimeters. Kiina drove it up the side of the canyon wall. The beast swung again – and missed. Kiina vaulted the chariot off the wall and over a dune. But she wasn’t quite fast enough. The Skopio landed a glancing blow, sending the chariot tumbling end over end and hurling the three occupants onto the sand.

Ackar and Mata Nui rolled to their feet, weapons drawn, facing the oncoming Bone Hunters. “Help Kiina,” Mata Nui said to Ackar. “I’ll draw the beast away from you.”

“Good luck,” said Ackar, dropping into a crouch to await the first attacker.

Mata Nui glanced down at Click. “Are you ready?”

The beetle snapped its pincers together in response. Then there was a bright flash as it transformed once more into a mighty shield. Mata Nui charged toward the Skopio.

Behind him, Ackar and Kiina were both locked in battle. Kiina parried a Bone Hunter’s sword with her staff, looking for an opening. When she saw the Hunter drop his guard, she struck, landing a solid blow with her weapon and hurling him from his rock steed. Two more Bone Hunters closed in. Kiina moved like quicksilver, keeping her enemies off-balance with sweeping kicks.

Nearby, Ackar was surrounded, fierce but outnumbered. Fighting mounted warriors on foot is a losing game, he thought. So it’s time to even the odds a little.

A Bone Hunter rode down on him, sword flashing in the sunlight. Ackar blocked the Hunter’s blade with his own. As the Bone Hunter drew back to strike again, Ackar launched himself into the air and landed a solid kick, knocking the Bone Hunter out of the saddle. The Glatorian landed atop the rock steed and urged it forward.

Up ahead, Kiina was hard-pressed in a fight against a bigger, stronger Bone Hunter. Ackar rode toward her, battling the Hunters on either side of him. As soon as he drew close to the canyon wall, he hurled himself from the saddle, somersaulting in the air – once, twice, three times. He came out of the move feetfirst, slamming into Kiina’s opponent and knocking him senseless. Now Kiina and Ackar stood back to back as the Bone Hunters closed in.

Mata Nui was having problems of his own with the Skopio. Its attention was now fully focused on him, which was what he wanted. Its blows were coming dangerously close to landing, though, and Mata Nui had learned at least this about his new body: It grew tired. And if he slowed down even a step, the Skopio would finish him.

The great beast, meanwhile, was growing impatient. It was time to crush this golden-armored pest. The Skopio concentrated, triggering the mechanical Thornax launcher built into it ages ago. With a hiss of hydraulics and a metallic hum, the launcher rose from the creature’s back and locked into place. Taking aim at Mata Nui, the Skopio fired.

Mata Nui stopped dead. For just a moment, he watched the beast’s transformation in disbelief. That delay almost cost him his life, as he barely got his shield up in time to take the brunt of the blast. Even with its protection, he was still knocked off his feet. The Skopio advanced, lifting a clawed leg into the air, ready to crush him. Mata Nui rolled to dodge the blow, landing neatly in a crouch. This time, he’d be ready for the Skopio’s next attack.

Behind him, he heard the sound of Kiina’s voice. “Ackar!” she said. “We’re finished unless we can make it to my village.”

“Try and get to the chariot,” Mata Nui yelled to the two Glatorian. “I have an idea.”

When the Skopio swung a leg at him again, Mata Nui didn’t try to move aside. Instead, he launched into the air and grabbed onto the leg. As the Skopio drew its limb back, Mata Nui was pulled high into the air. When he was at the same level as the monster’s head, Mata Nui jumped off the leg and landed on the Skopio’s back.

It took Mata Nui only a moment to figure out the controls for the mounted Thornax launcher. Aiming at the Bone Hunters menacing Ackar and Kiina, he fired. The blast scattered the Hunters like grains of sand before a fierce wind. Ackar and Kiina took advantage of the opening to run for the chariot. Bone Hunters who pursued them were met by another devastating Thornax blast, courtesy of Mata Nui.

Angered by its unwanted rider, the Skopio whipped its stinger tail forward, knocking Mata Nui off his perch. He twisted in midair and managed to land on his feet on a high ledge. Down below, Ackar and Kiina had reached the vehicle and were speeding toward the Skopio, hoping to slip underneath the creature. Mounted Bone Hunters galloped close behind.

Mata Nui drew his sword and plunged it into the rock beneath his feet. The power of the blade split the stone, sending half of it tumbling down the mountainside. It struck other boulders, knocking them loose. Soon, the whole mountainside seemed to be moving, stones careening down in a huge rockslide.

Kiina heard the sound of the avalanche and saw the first rocks strike the sand up ahead. “This is going to be close!” she yelled to Ackar, pushing the chariot to full speed. The metal frame of the vehicle shook violently, bolts snapping off and flying in every direction.

Spotting a gap barely large enough for the chariot, Kiina aimed right for it. The vehicle shot through it and onto open sand just as the rain of rock brought the Skopio down with a tremendous crash. The Bone Hunters weren’t so lucky – they were under the creature as it fell, buried beneath its body and a ton of rock.

As they neared the mouth of the canyon, Kiina allowed herself a relieved sigh. Then she suddenly realized someone was missing. “Hey, where–?”

Ackar pointed off to the east. “There!”

Kiina saw him now, too. Mata Nui was surfing down the side of the mountain on his shield, vaulting over outcroppings as if he had been doing it all his life. One particularly large rock sent him high into the air. He somersaulted, grabbing his shield and spinning into an upright position just in time to land on the hood of the chariot.

“Woo-hoo! Those Bone Hunters are going to be eating Skopio belly for weeks,” Kiina said, smiling broadly. “Not bad, other-worlder.”

Ackar’s grin abruptly vanished from his face. He laid a hand on Kiina’s arm, as if to steady her against a shock. She glanced at him, then up ahead – and that’s when she saw it.

A plume of black smoke rose from the nearby oasis. Flames shot through the cloud of ash and soot. As they drew nearer, Kiina could hear the sound of shelters collapsing, sand stalkers screeching in fear and pain, and something even more chilling: the war cries of Skrall.