In the distant future of 2002, two mechs stand united to protect the ice planet Krysto from the forces of Blacktron II and Spyrius. 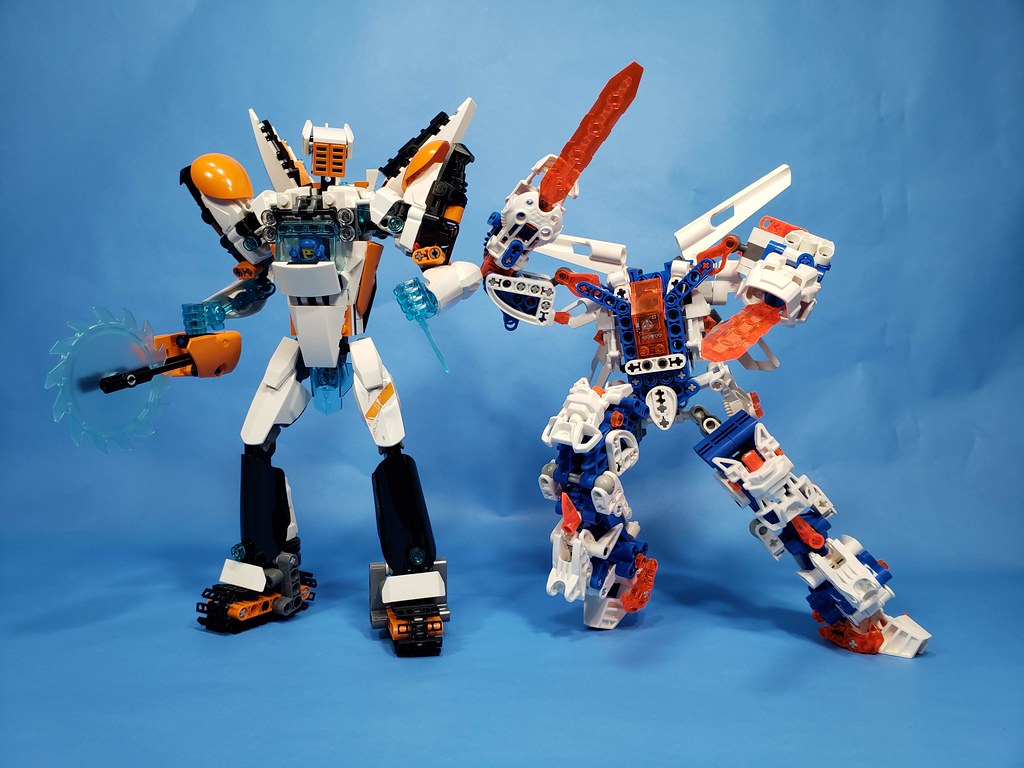 We built these two for the 2020 BZPower convention circuit, so look for them at Lego conventions this year! We’ll also be exhibiting in-person at BrickUniverse Raleigh and BrickFair VA, so come say hi if you’re there!

~SUMMONER~: This happens to be the first year (in some time) that I’ve had a substantial enough collection to build something with my own parts, so I was bent on sticking to that rather than siphoning from TN’s bins for this build. This did prevent me from using the classic color scheme of the theme, but it did provide some fun challenges to overcome elsewhere.

I had recently acquired the Systar Party Crew set from TLM2, which features a very festively-dressed Benny, whose white boots and stars-that-could-be-mistaken-for-snow design felt a perfect fit. But given that I wanted to use as much constraction in the build as possible, I opted for a mech-type build over his classic spaceship accompaniment.

He did not appear particularly perturbed by this direction.

Now I did struggle for a while on how to build a decent cockpit for Benny into a constraction structure, and it did come out mostly System by the end, but it was a fun process that came out with a very solid, satisfying result. (I didn’t take any photos of the internals until the build was all but finished, so that will have to wait for now.)

Little changed in the torso before I slapped some legs on.

The 2015 armor pieces on the shoulders rest perfectly on top of the System build of the torso, which I was very pleased to find.

Realizing that the arm stubs I began with would be very difficult to build off of, I quickly opted for a design where that would be minimally improved. But at least they looked cooler.

I’d also tacked some wing-things on and made a rough start on a cockpit to keep the cold out. Benny was very excited for this. Oh, and I decided that a head was in order as well. Because what mecha is complete without an ever-practical cranial unit?

Jump ahead way-too-far and see that I went a little too Gundam with it for a while.

I did manage to finish out some fairly sleek arms, though, in addition to those nicely treaded toes. There’s a saw now too, since that’s kind of a thing on the Ice Planet.

Finally, by some stroke of luck, I found a much sleeker build for the noggin, which dashed any remaining desire to duplicate the likeness of a massive mecha franchise.

It was around this time that I decided to ditch my attempt to utilize blue in the color scheme, as there was just too little available for it to really contribute in a coherent fashion. This left Benny himself less of a match to the build, but it was still worthwhile for the overall appearance of the suit.

With that, and a few final tweaks, we finally had the finished-ish product.

It just needs some more Benjamin.

(Oh yeah I threw in a docking tower for fun.)

(I swear I wasn’t going for Gurren Lagann at all, those teeth just seal the cockpit up nicely.)

TuragaNuva: When I started working on the Sleet Slicer, I really just had 2 things in mind: the colors (blue, white, and trans-orange, in the style of Ice Planet 2002) and that I wanted to use those Nexo swords somewhere. The legs were the first thing I built, starting with some early Bionicle bodies to create some bulk, then building them out:

The legs were easy, but the torso proved to be a bit of a pain. Several of my initial ideas didn’t work out, and making space for a minifig to fit inside was more annoying than I expected (I typically just build constraction characters; I’m not used to having to leave space for a cockpit). The wings went quickly, though – they’re simple, but I find them effective.

Once I made it to the shoulders, I went straight to working on arms before finishing the torso:

The arms, in contrast to the body, went pretty quickly – though I did make a number of adjustments to the upper arm before I was satisfied with it. And I finally found somewhere to use the swords! I had hoped to incorporate more of them, but for some reason I could only find 2. Another reminder that I really need to sort all my unsorted Lego…

From there, I replicated the arm (and made some final adjustments to both of them), and then finished up the torso:

From there, all that was left was to make a better minifig to pilot this thing (I was using Clay as a placeholder while I built it). Here’s what I ended up with: 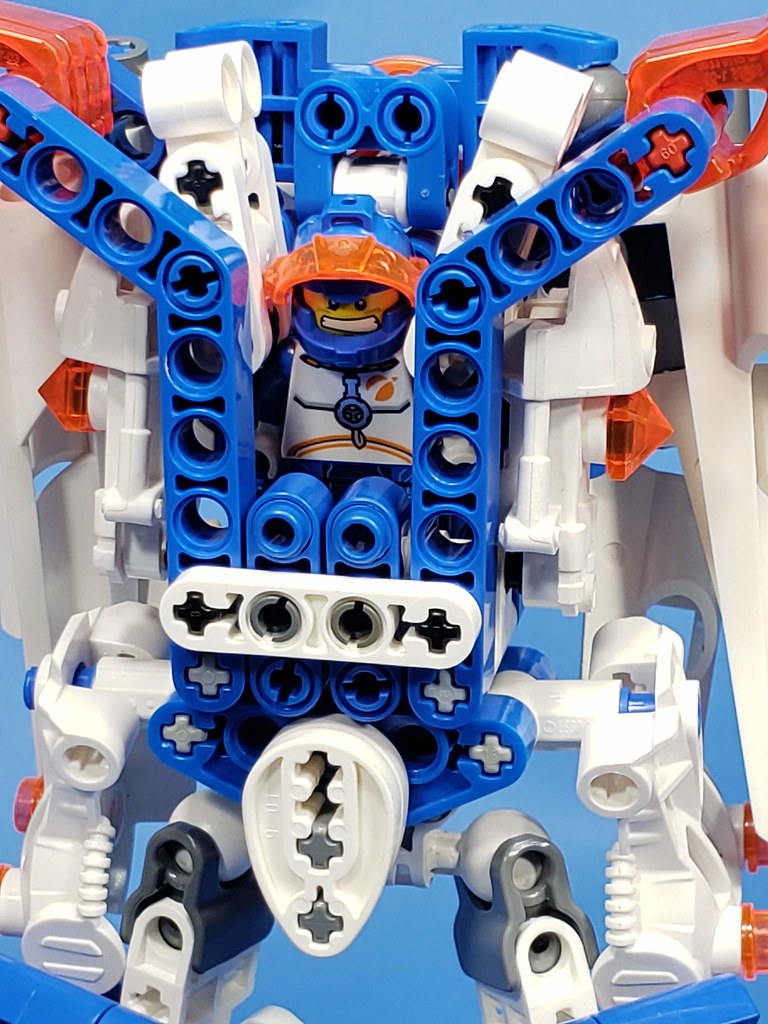 And with that, the Sleet Slicer is complete! (sorry I didn’t have quite as much detail as ~SUMMONER~ :p) 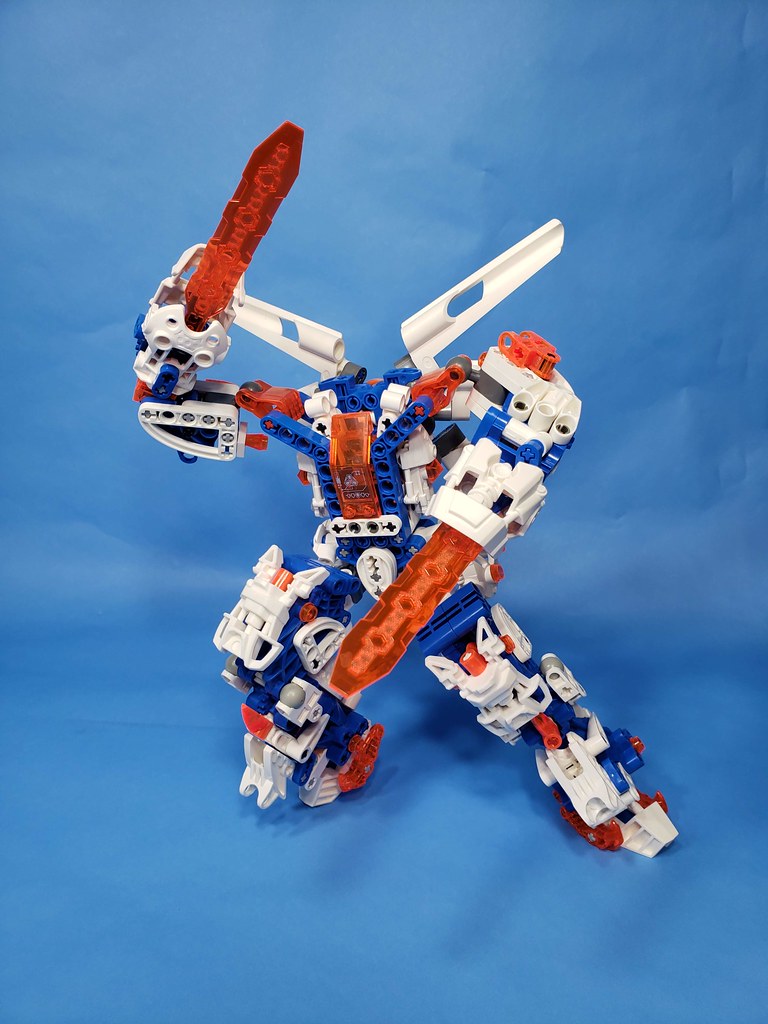 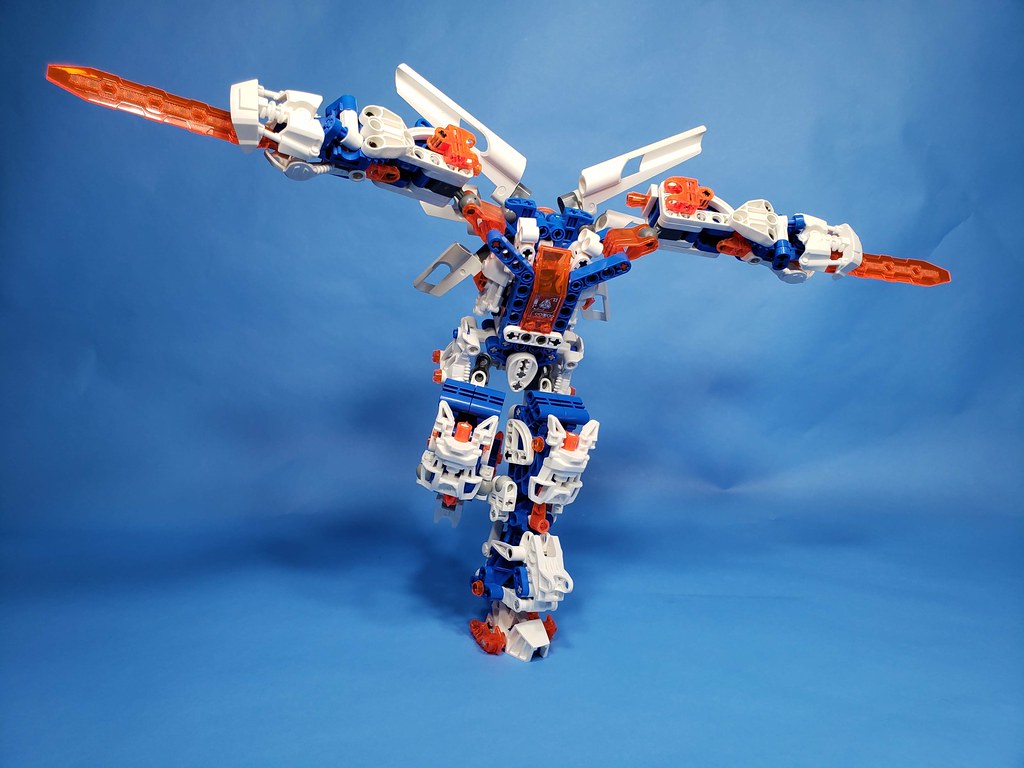 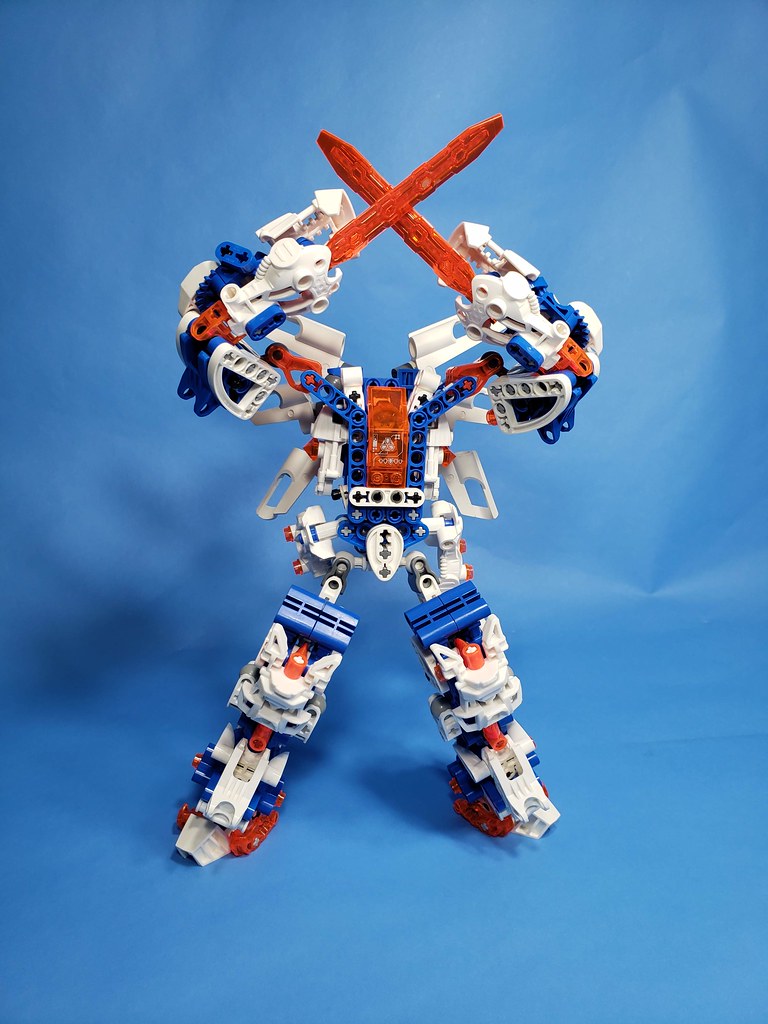 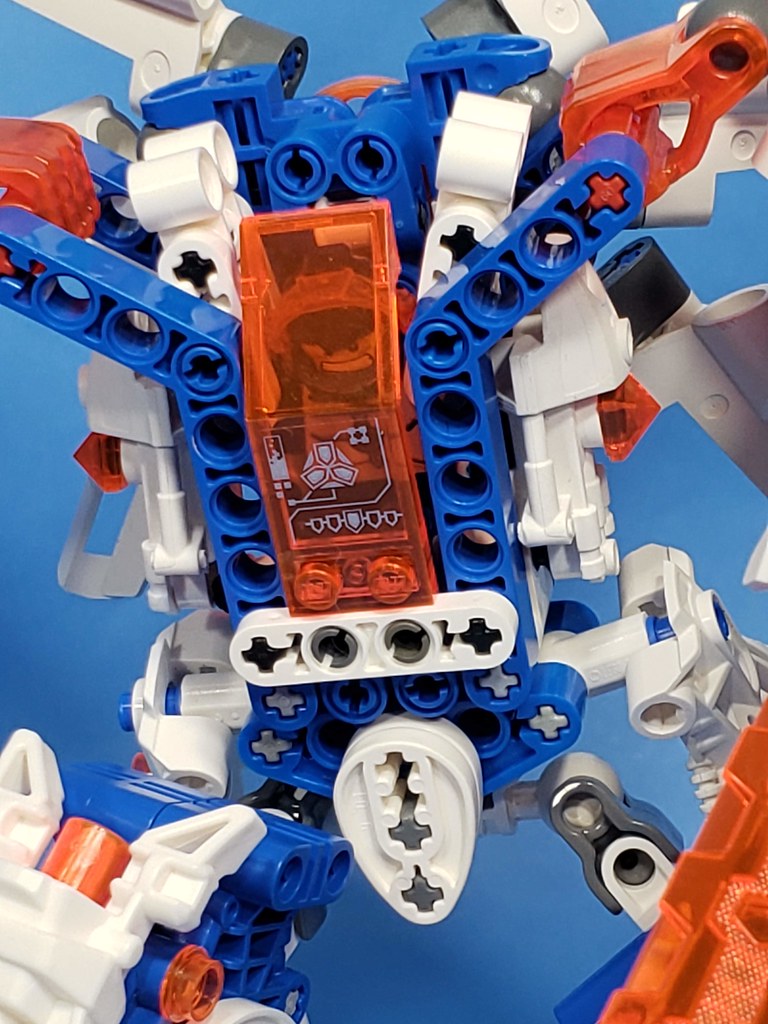 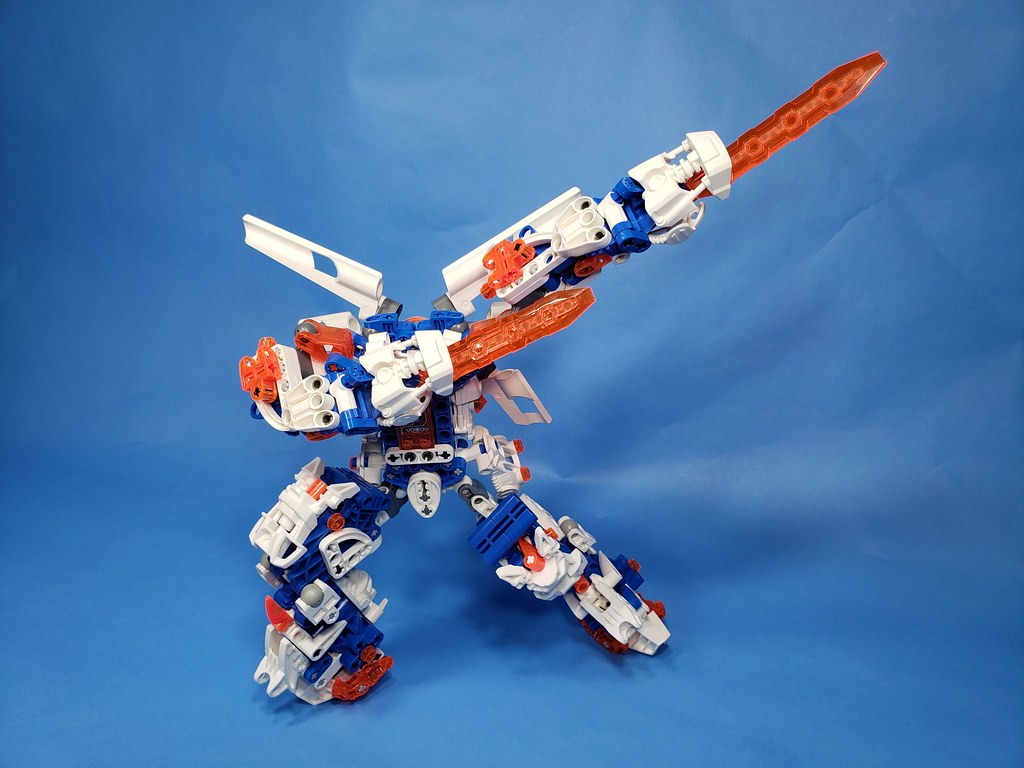 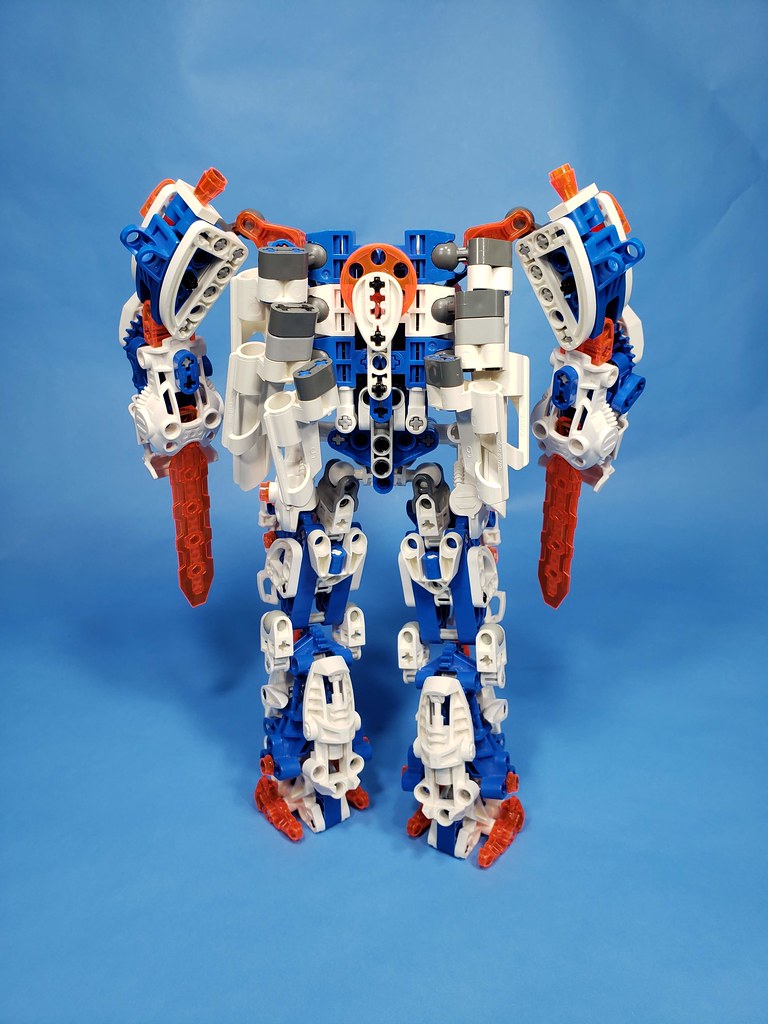 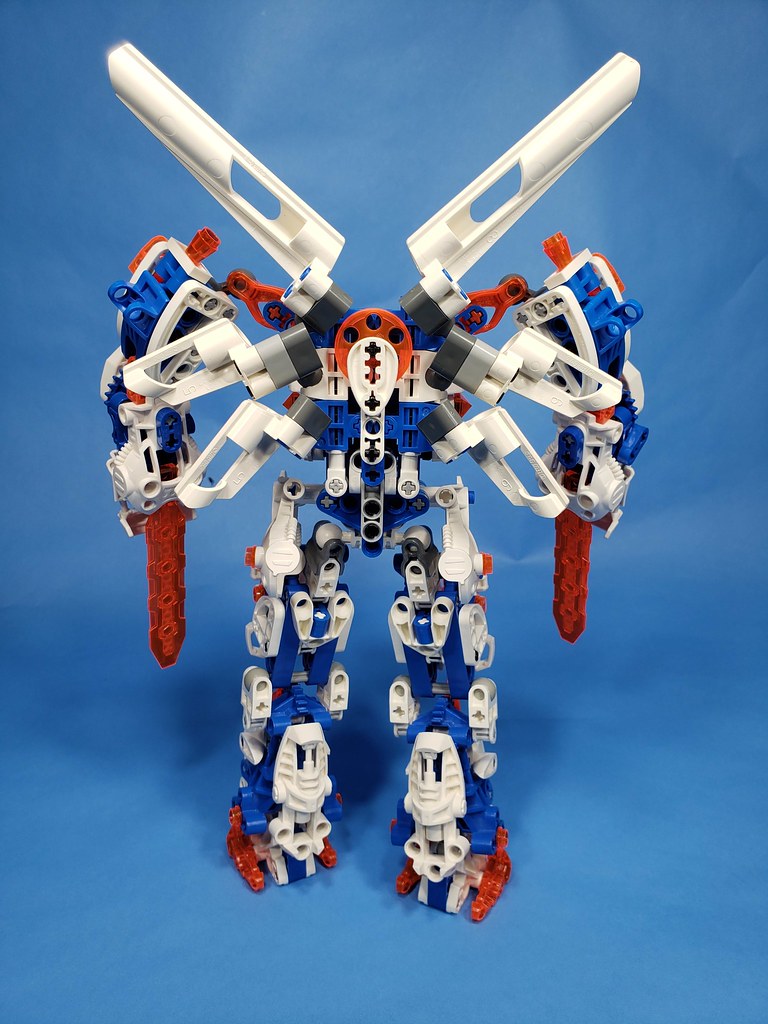