Her armor pitted and scarred from a thousand battles, Toa Helryx leads the Order of Mata Nui in the war against the Brotherhood of Makuta. 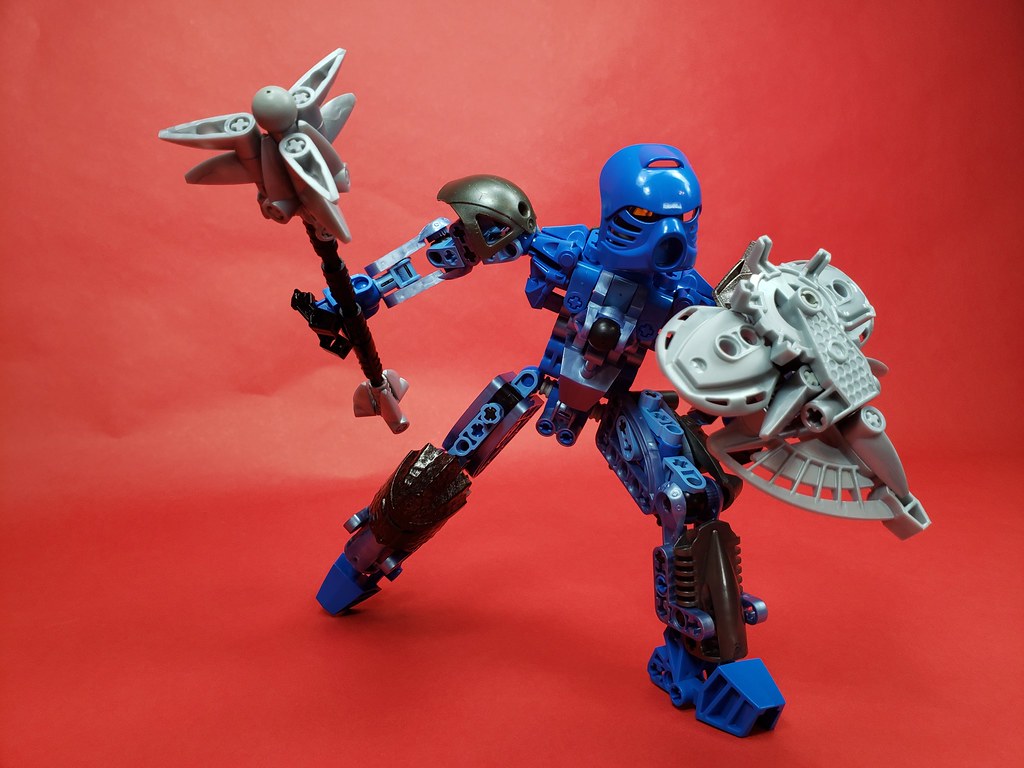 I built this for TTV’s contest to determine the canon appearance of Toa Helryx. She was described by Greg as having pitted and scarred armor and a frail appearance due to all that she’s been through. I decided to portray this by having her armor clearly worn and aged, with asymmetry where pieces are missing or have been replaced – the color texture of some Knights Kingdom armor pieces, in particular, I found helped to sell this effect. 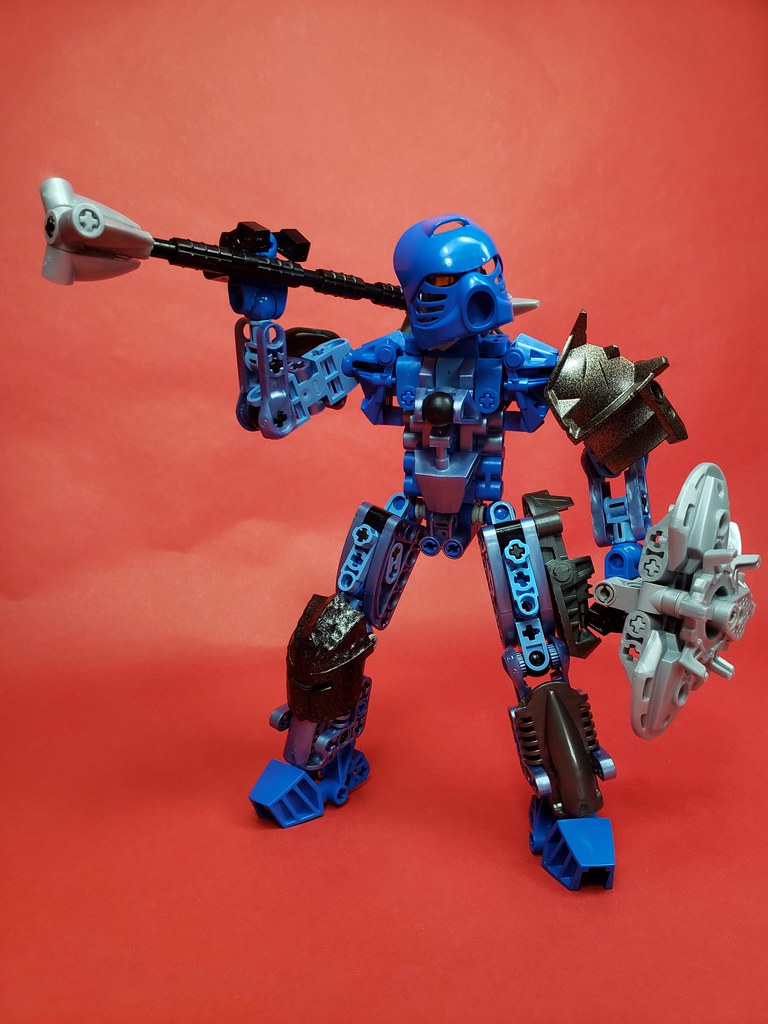 For her “original” colors (the colors of those pieces not as aged and rusted), I took inspiration from Gali Mata’s color layout, since the Toa Mata were among some of the earliest Toa created, and Helryx was essentially a Toa prototype. But I added a twist by mixing metallic blue in with the light blue, adding more of a sheen to Helryx’s armor while still keeping the recognizable layout of medium blue and lighter blues (though with a splash of the lighter metallic blue on the torso). 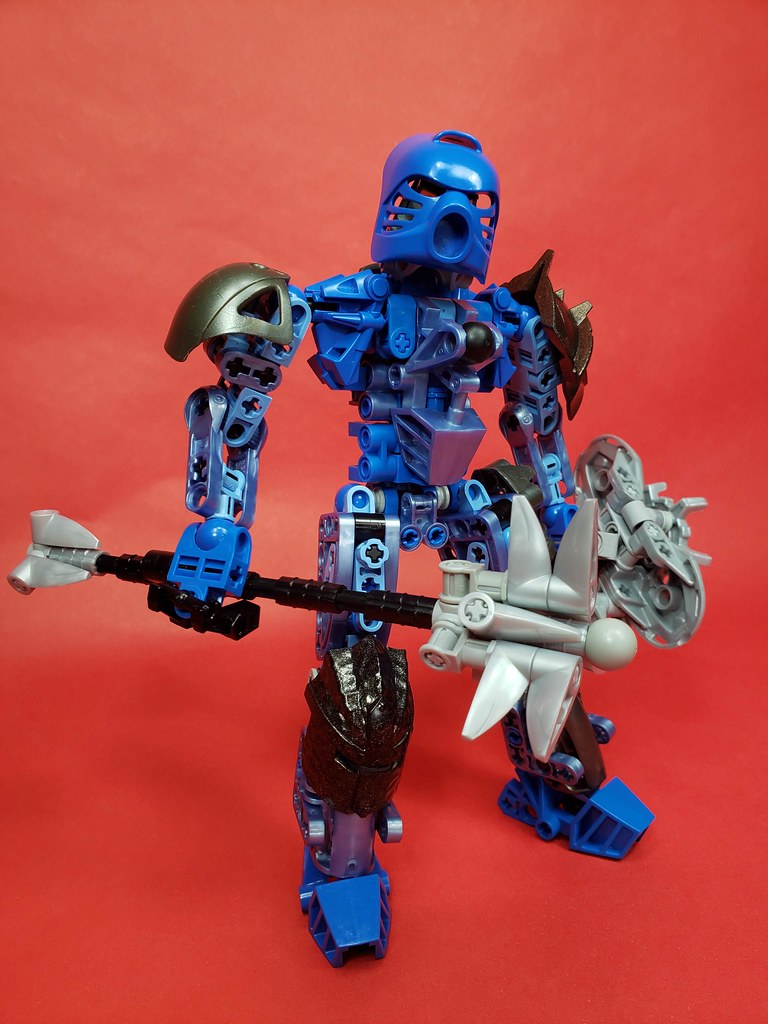 I also took some inspiration from the Toa Mata for the build itself – the two-fingered hands, the black ball joint in the chest, the Mata feet, the general shape of the torso were all done to emulate (but not copy) the general Mata design (again, envisioning Helryx as a sort of prototype for the Mata). I even threw in a gear on her back for good measure! 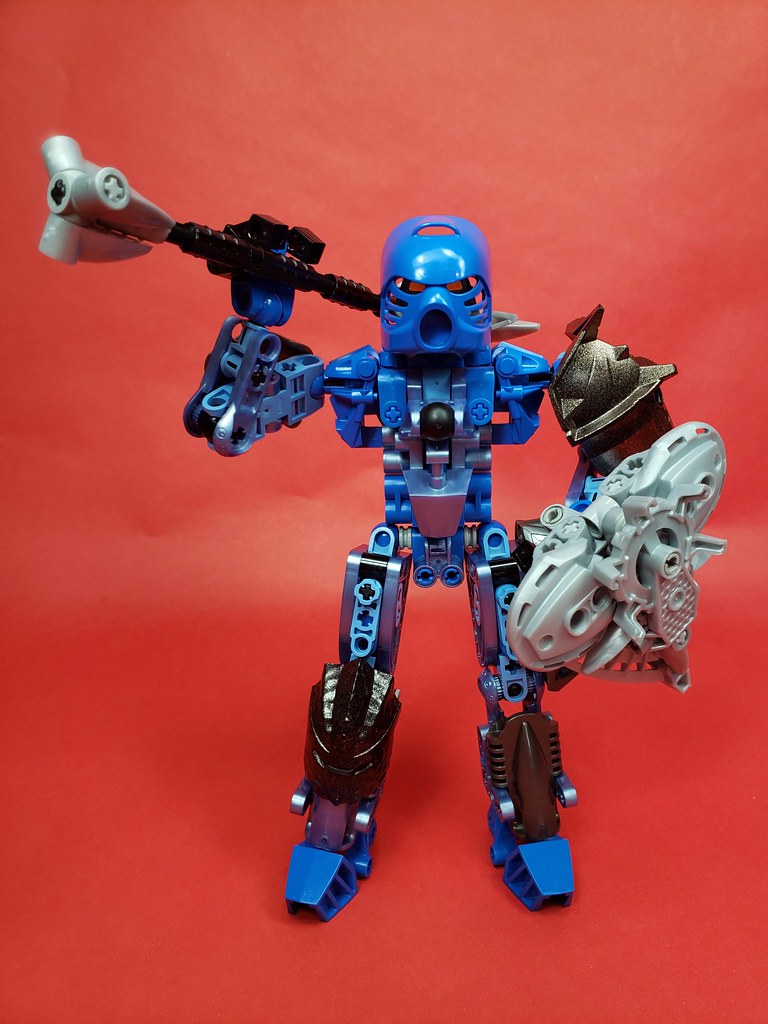 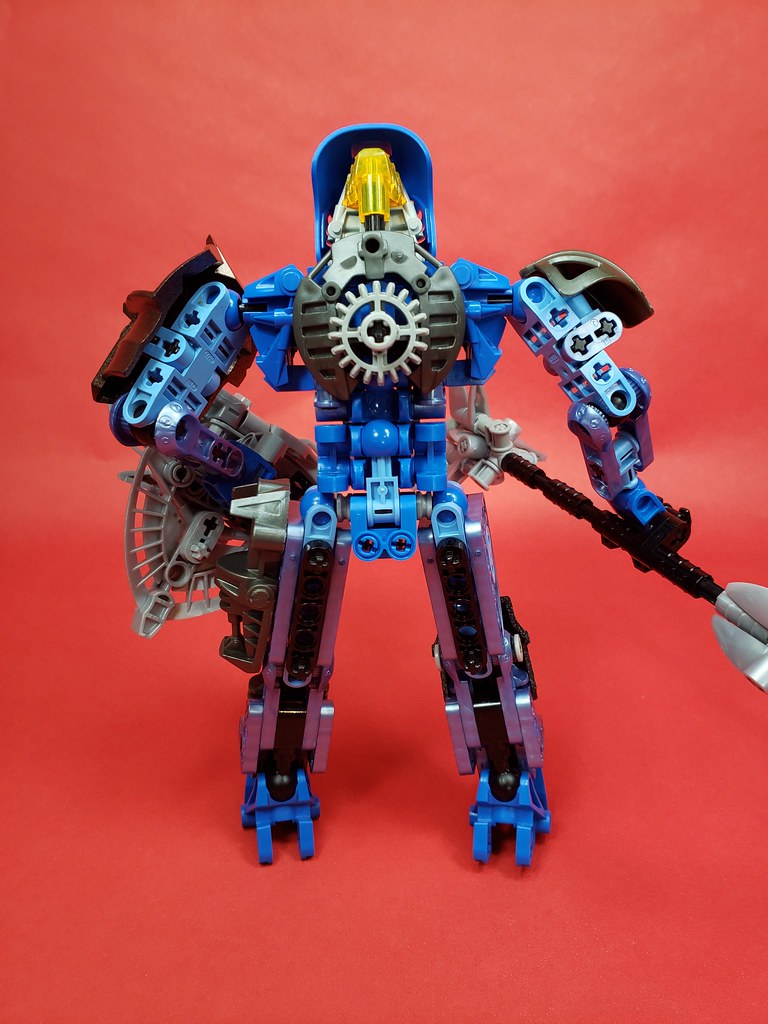 And finally, the weapons: we know that Helryx carried a mace and a shield. I aimed to create a mace design somewhere between the recognizable “spiked ball” design, and something more like this traditional medieval mace:

I also didn’t want the mace head to be absurdly large – intimidating, but not something that looks like it would tip her over! The design I settled on is simple, but I think it looks like an effective weapon/tool, and at a reasonable size for Helryx to carry. Oh, I also used axle connectors along the handle to add a sense of texture to it! 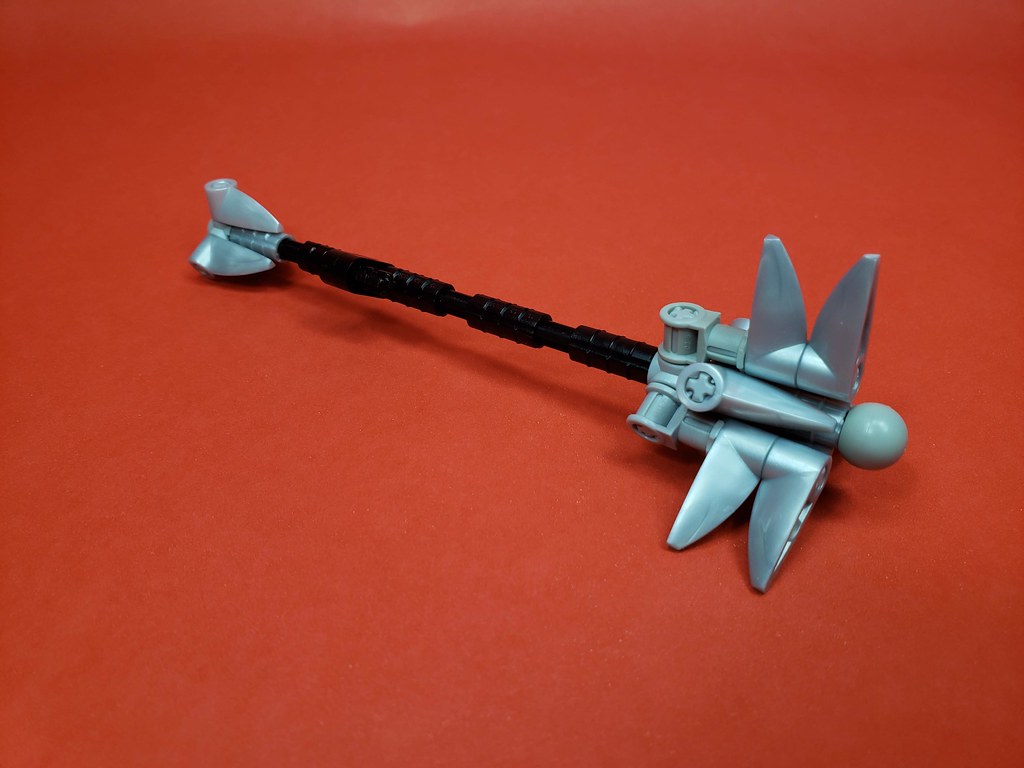 The shield was a little tricky – I didn’t want something enormous, but I also didn’t really want just a little buckler. I built it to have a recognizable medieval shield shape, but with some spiked details (to accompany the style of the mace and some of her armor). 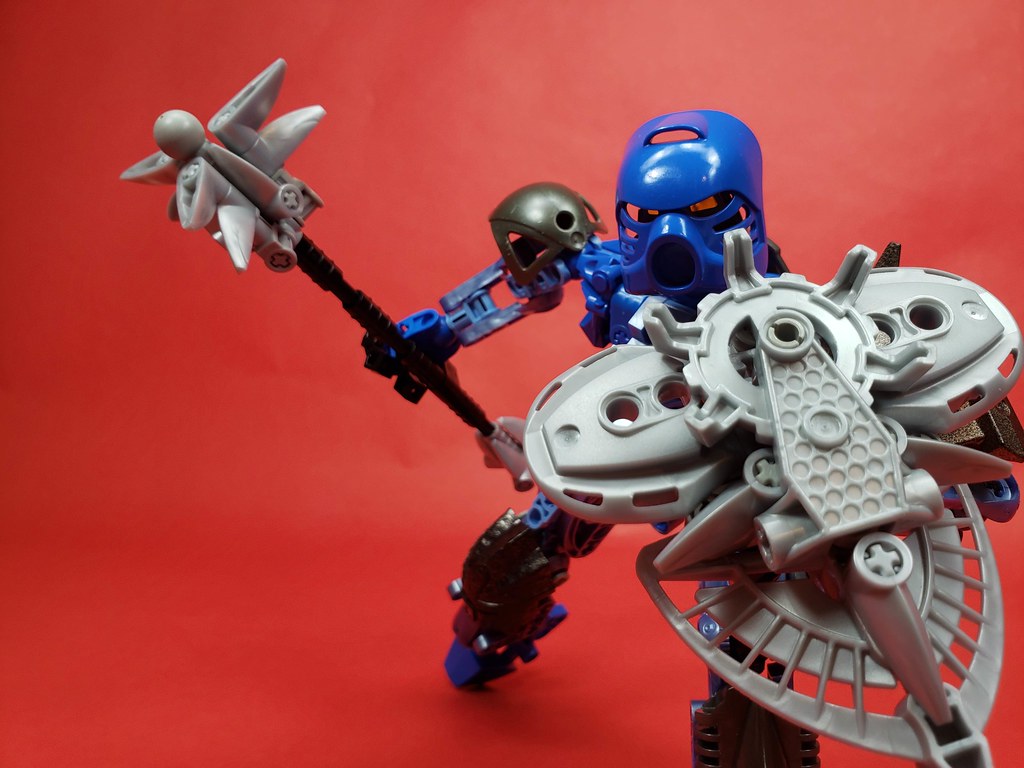 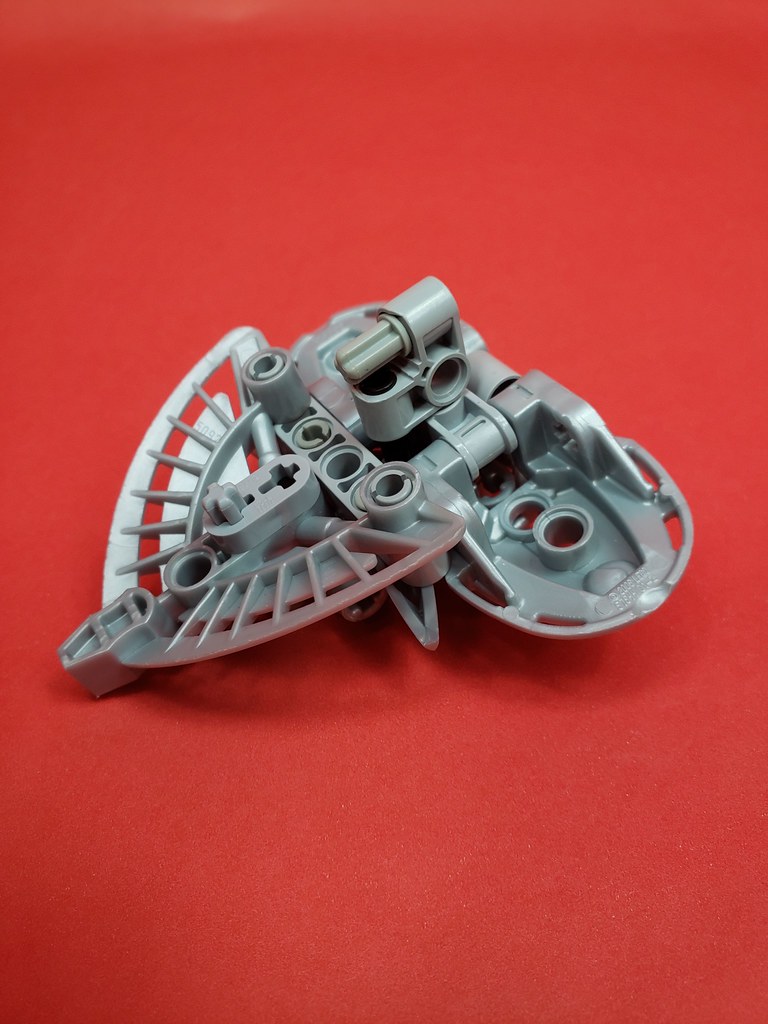 Oh right, almost forgot to mention the mask! Helryx’s mask has no canon depiction (yet), and the mask of the winning MOC will be disregarded in her official appearance, so I decided to simply give her the Hau, since it’s the symbol of Mata Nui, the being she is sworn to act in service of.

Before I go, here are a few simple breakdown pics to illustrate how the more complex parts were built: 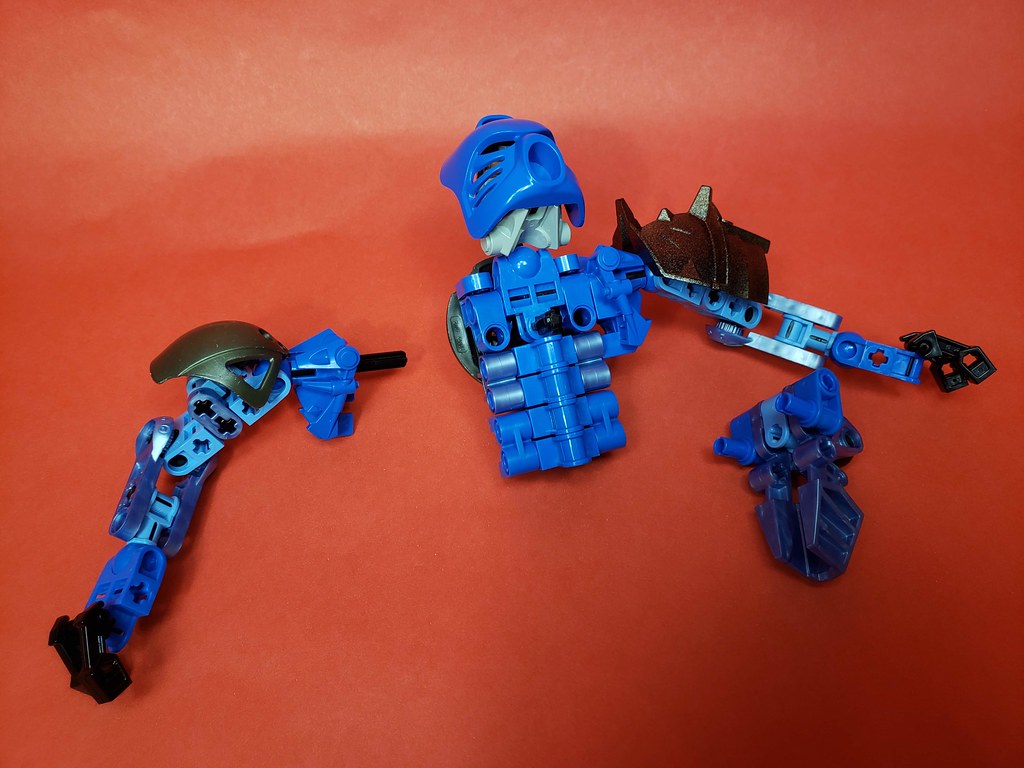 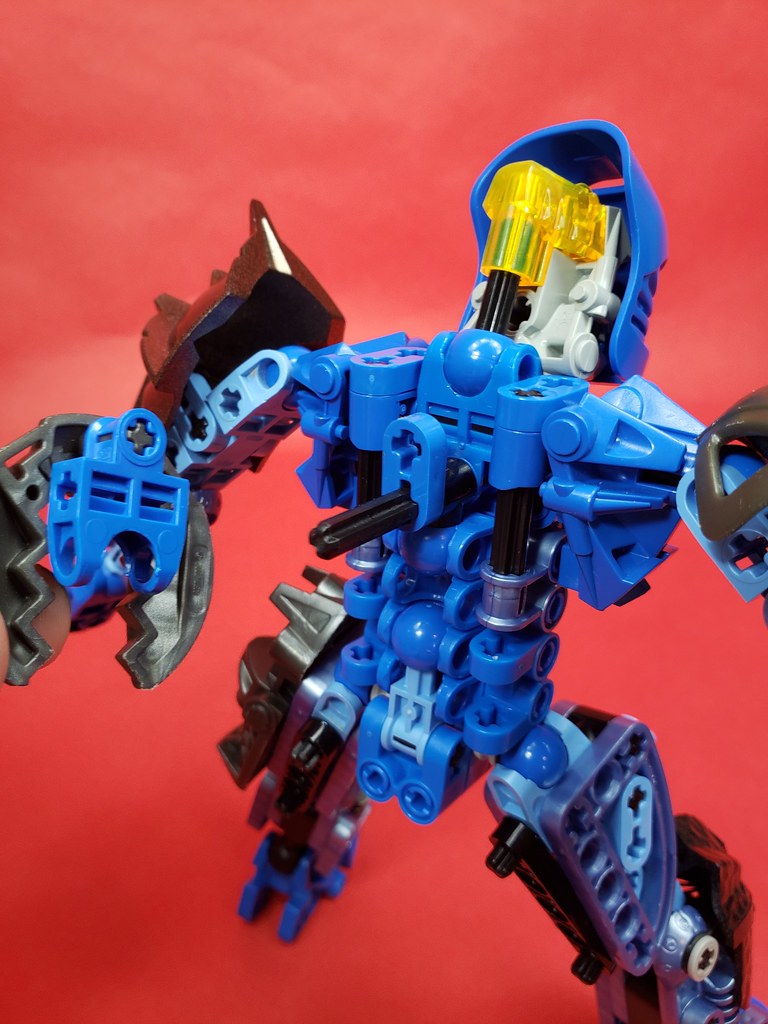 …and that’s it! Feel free to leave your thoughts in the comments – and of course, don’t forget to vote in the contest! 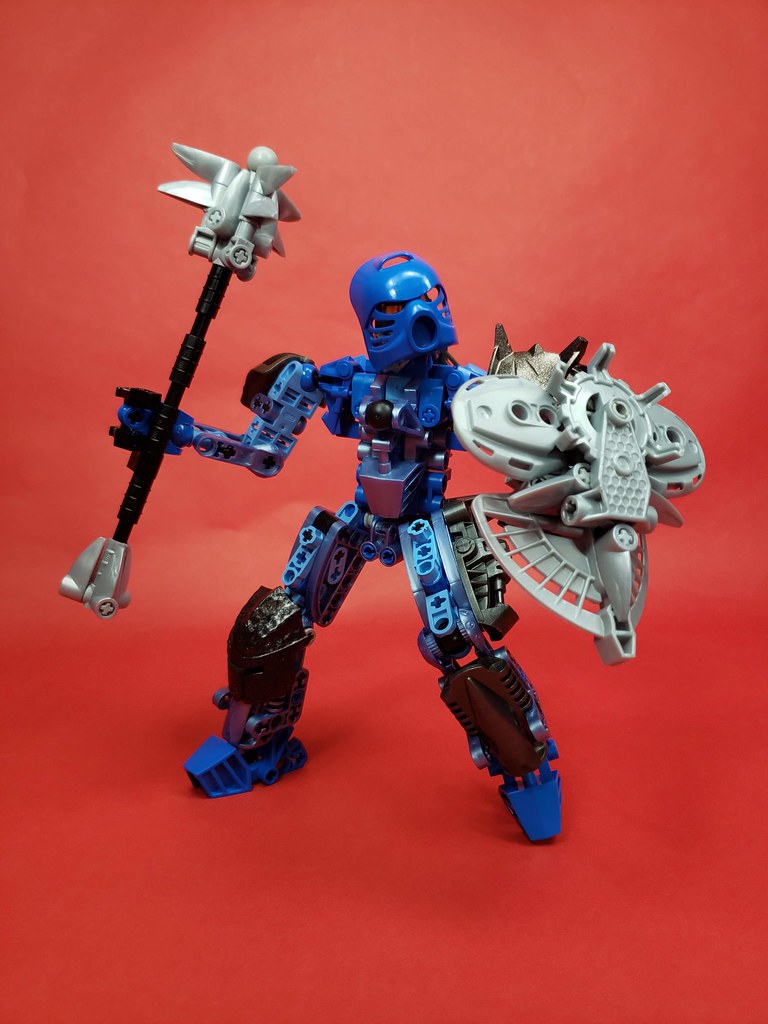